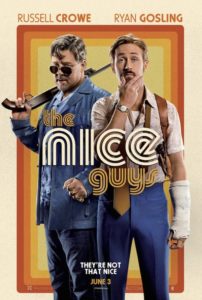 Shane Black’s first film since Iron Man 3 is funny, action-packed, and pairs the unlikely duo of Russell Crowe and Ryan Gosling to perfection. Set in 1970s Los Angeles, The Nice Guys is an entertaining buddy action-comedy about two private detectives who investigate the death of a well-known adult film actress and try not to kill each other in the process. The performances are terrific across the board and there is plenty of heart in between laughs in this enjoyable summer flick.

The film opens with the death of porn star Misty Mountains (played by Murielle Telio), as she crashes her convertible in the backyard of a luxurious Hollywood Hills home. Soon, we are introduced to Holland March (played by Gosling), a two-bit private eye who has been hired by an elderly woman named Mrs. Glenn (Lois Smith) to look into the death of her niece, Misty. March is a single father trying to be a role model for his twelve-year-old daughter Holly (played by Angourie Rice), while struggling with the fact that he is not a very capable private investigator. Jackson Healy (Russell Crowe) is also a private eye, who is hired by Amelia Kuttner (Margaret Qualley) to inflict some pretty serious pain on Holland March for sticking his nose where it doesn’t belong (in case you are wondering why Ryan Gosling is wearing a cast on the film’s poster).

Eventually, March and Healy realize that the death of Misty Mountains is just the beginning of a much bigger conspiracy involving Amelia Kuttner, who has made an adult film with Misty Mountains called How Do You Like My Car, Big Boy? that attempts to expose the truth about the smog problem in Los Angeles. After digging deeper, they find that the conspiracy includes the chief of the Department of Justice—Amelia’s own mother—Judith Kuttner (played by Kim Basinger), the mob, and a ruthless hitman that goes by John Boy (Matt Bomer). Healy and March (along with March’s daughter Holly) attempt to locate the film, while trying to get to the bottom of the conspiracy.

While the plot is a bit convoluted at times, the pairing of Russell Crowe and Ryan Gosling is a stroke of genius. Crowe plays Jackson Healy as a tough guy with a heart of gold, while Gosling is hilarious as Holland March, playing him as a bit of a cowardly buffoon with just enough audacity to make it as a private eye. When the two are on screen together, whether they are at each others’ throats or playing good cop/bad cop in the interrogation of a hotel bartender, they are as good as any comic duo working today. While neither one of them are necessarily known for their comedic chops, they prove here to be quite natural as funnymen. One of the keys to this is that neither one of them is acting like they are in a comedy. They are not hamming it up or going for laughs—they are simply playing characters who are trying to track down an adult film without getting killed in the process. And the result is an endearing action-comedy that is well worth the price of admission.

Parallels are already being drawn between The Nice Guys and the 2005 crime comedy Kiss Kiss Bang Bang, and it is no surprise that Shane Black directed and co-wrote both films. Black does a great job with his newest film, combining car chases, shootouts, and interrogations, while managing to weave some comedy into just about every moment of it. There is a lot of plot in this film, and if you stop paying attention for a second, you will probably miss something important. However, the complex narrative serves as a perfect vehicle for its colorful characters to shine, and to explore many different aspects of 1977 Los Angeles, from lavish porn parties in the Hollywood Hills to the music and the cars and the outfits of the era. It is equal parts Boogie Nights and Beverly Hills Cop, and the final result makes for a supremely entertaining two hours.

The Nice Guys, which premiered at Cannes back in May, is an original, chaotic, and thoroughly enjoyable action-comedy. With a summer full of sequels and superhero mashups, it is refreshing to see a big-budget film with a slew of A-list actors that is not based on an existing franchise. While the plot is a bit frenetic, the action is non-stop from beginning to end, and Crowe and Gosling are as fun to watch as you’d imagine them to be. If you are looking for a fun summertime ‘70s buddy movie, then The Nice Guys will not disappoint.