Review: Hello, My Name is Doris 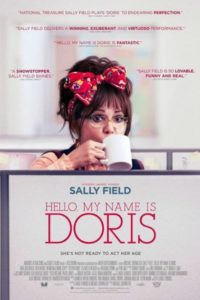 The first film that Michael Showalter has directed in over a decade, which stars Sally Field as the eccentric title character, is an incredibly sweet and funny take on an older woman who finds herself in love with her younger coworker. Showalter, who is well known for collaborating with David Wain as an actor and a writer (Wet Hot American Summer, MTV’s The State), proves that he has real chops behind the camera, as well.  And Sally Field turns in her best performance in years.

Hello, My Name Is Doris stars Sally Field as Doris, a woman in her sixties whose mother has recently passed away. Doris, who has been living in her mother’s house for her entire life, finds herself living alone for the first time. Soon, she meets John Fremont (played by New Girl’s Max Greenfield), the young new head of the art department at her company, and falls in love with him immediately. She finds herself unable to stop thinking about him, and after attending a self-help seminar with her friend Roz (played by Tyne Daly), she gathers up the courage to make her way into John’s life. With the help of Roz’s granddaughter Vivian (Isabella Acres), Doris creates a fake Facebook profile page and adds John as a friend. From there, she finds out that John is a huge fan of (fictional) indie band Baby Goya and the Nuclear Winters, and she manages to “accidentally” bump into John at one of their concerts—one of the funniest scenes in the film, and Sally Fields’ seemingly Mork-inspired outfit is perfect—and a friendship is born. The film explores many different kinds of relationships, and it examines what it means to find yourself in the twilight years of life.

Sally Field is absolutely perfect as Doris, and she is already receiving Oscar buzz for her performance. Doris is like an onion, as more and more layers are revealed throughout the film. She is, on one hand, a bit of a shut in and a hoarder (as was her mother), but there winds up being so much more to her than that.  John says it right when he is talking to some of their mutual coworkers, and he says, “Doris is weird, but like good weird.” She is strange and quirky, but it turns out that there is much more to her than that. In a scene between her and John, she tells him a heartbreaking story of a man to whom she was once engaged when she was 20 years old. He got a job in another city, and because her mother relied on her so much, she decided to stay in New York. Sally Field is able to show how this decision was difficult, but necessary. It shows us how much she loved her mother, and how much living she put on hold because of her. A lot of this is the writing, but most of it is Fields’ performance.

One of the things that gives Doris so much life is the supporting cast. Showalter, along with casting directors Sunny Boling and Meg Morman, have assembled some of the best veteran actors in the business, as well as some terrific newcomers. Max Greenfield does a superb job as the apple of Doris’ eye, John. Beth Behrs (star of 2 Broke Girls) is great as John’s new girlfriend. Consummate character actor Stephen Root is solid as Doris’ brother who is trying to get her to move out of their mother’s house so that they can sell it, and Wendi Mclendon-Covey is great as his wife and accomplice. Peter Gallagher makes a small appearance as the charming self-help guru who helps Doris realize her potential. Tyne Daly, Elizabeth Reaser, Rich Sommer, Don Stark, Natasha Lyonne, and many others all contribute to fully flesh out the world of the film.

The movie is based on a short called Doris & The Intern, which was written and directed by Laura Terruso, who also cowrote the feature screenplay, along with director Michael Showalter. The script is full of love, and one of the most interesting parts is the way in which it handles the relationship between Doris and John. Even though their multiple-decade age difference is obvious, it is never once mentioned. Doris’ crippling shyness and inability to express herself to John is much more present as an obstacle to her affection, and her ingenuity and personality are on display throughout, making a romantic involvement between the two characters seem pleasant and not at all outside the bounds of realistic. Some of the other relationships in the film are handled equally as beautifully, such as Doris’ relationship with her friend Roz and Roz’s granddaughter Vivian, and Doris’ relationship with her mother, even though the latter is deceased when the movie begins.

Hello, My Name Is Doris is sweet, funny, heartwarming, sad at times, imperfect, and tremendously uplifting. It is an unlikely romantic comedy, with great performances all around, particularly from the always wonderful Sally Field. Michael Showalter proves that he can work with a big cast, and the script is nuanced and full of heart. With a slew of superhero movies and reboots in the theater as of late, this might be the perfect film for those who want to see a character-driven comedy drama that will leave you with an enormous grin on your face.