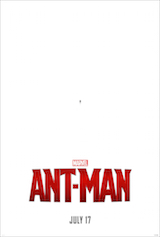 Did we really need another movie about an obscure Marvel superhero?  Well, maybe not, but Ant-Man still stands high above the pack (pun intended).  Paul Rudd turns out to be quite convincing in the title role, and the rest of the cast (including a steals-every-scene-he’s-in performance from Michael Peña) does a great job.  The visuals and the special effects are very effective, and the film’s pace is swift.  Marvel’s new film is one of their best to date.

Ant-Man tells the story of Scott Lang, a thief with a good heart, who is being released from the San Quentin State Prison for attempting a Robin Hood-esque robbery of a multi-billion dollar corporation that once employed him.  Now, he is coming back to society, moving in with another former prison inmate, Luis, who has been out now for a year (the aforementioned Peña), and hopes to become a presence in his daughter Cassie’s (Abby Ryder Fortson) life, much to the chagrin of ex-wife Maggie (Judy Greer) and her police officer husband/Scott’s foil Paxton (played by the omni-present Bobby Cannavale).  Scott, after being fired by his job at Baskin-Robbins, reluctantly returns to his life of crime to break into the safe of a millionaire.  It turns out that this safe belongs to Dr. Hank Pym (Michael Douglas) the inventor of the Ant-Man suit (the suit is actually the only item contained within the safe), and Pym had deliberately set up Scott to rob him, believing that Scott would be the perfect candidate to fill the Ant-Man suit.

The Ant-Man suit, which allows the occupant shrink down to the size of an ant, is now needed to take down Darren Cross (Corey Stoll), who has become the CEO of Pym Technologies and has created a shrinking suit of his own (the Yellowjacket) that he plans on selling to the highest bidder.  Scott, with a lot of help from Pym and his daughter Hope (played by Lost alum Evangeline Lilly) prepares to save the world from potential disaster, as the technology behind the Ant-Man and Yellowjacket technology falling into the wrong hands could prove catastrophic.

Ant-Man is a lot of fun.  It mixes Paul Rudd’s humor and sensibilities with the action and adventure that you’d come to expect from a Marvel movie.  The humor in the film is really what differentiates it from others in the genre.  Aside from Iron Man and its star Robert Downey Jr., Paul Rudd’s Ant-Man is the first superhero to include so much comedy amidst the action.  Scenes between Rudd and Michael Peña are particularly enjoyable to watch.  The reason, however, that Rudd works so well in this role is the incredible amount of heart.  Rudd (much like Tom Hanks or Jack Lemmon) is the consummate good guy.  He has a quality that just makes you want him to succeed, as he faces insurmountable odds in the face of greed and corruption.  Ant-Man is the perfect platform for his talents, as he fights the greatest of evils to not only save the world, but to save a place for himself in his daughter’s life.

Visually, this film is filled with eye candy.  It is always fun to see humans running around with ants and other things that are normally tiny in comparison (look no further than the classic—that still holds up quite well, by the way—Honey, I Shrunk the Kids).  The best example from this film is the final confrontation, which takes place in Lang’s daughter Cassie’s bedroom.  As Ant-Man takes on Yellowjacket on a toy train set, we go back and forth from Ant-Man’s tiny perspective, as it feels like a classic chase as our hero pursues the villain, jumping from train to train in the process, to the normal perspective of a person in the bedroom, as the train moves across the track with its toy noises and its innocence.  This scene is just one great example of how the film plays with perspective in unique and interesting ways.

While Ant-Man is another in a slew of (normally) unnecessary comic book movies, it does enough things right to warrant its existence.  It has plenty of action, heart, and comedy to keep audiences interested from start to finish.  Paul Rudd is great in the lead role, the pace is quick, and the visuals are endlessly entertaining.  With all the superheroes flying through theaters this summer, Ant-Man is well worth the price of admission.