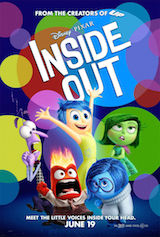 Pixar’s first non-sequel in six years (subpar Brave notwithstanding) is one of their best.  Inside Out combines comedy and drama, laughter and tears, and runs the gamut of emotions (both in character personification, as well as for the audience).  The visuals are incredible, the voice performances are perfect, and you will leave the theater feeling emotionally fulfilled.

Pixar’s fifteenth feature film tells the story of the emotions inside a young girl’s head.  Joy (Amy Poehler), Sadness (Phyllis Smith), Fear (Bill Hader), Anger (Lewis Black), and Disgust (Mindy Kaling) work inside the control room inside the brain of Riley (Kaitlyn Dias).  The film begins with Riley being born, and born with her is the first of her emotions, Joy.  Soon, however, Sadness emerges, and eventually the rest of her emotions join the party, as well.  Switching back and forth between Riley’s perspective and the perspective of the feelings happening inside of her, the story progresses.

Riley’s memories are stored in her head, which include several core memories that shape her personality.  These core memories include the first goal that she ever scored in hockey (this contributes to her love of the sport), a memory of her admitting to a wrongdoing (which contributes to her honesty), along with several others.  Her core memories are all joyous (each of her memories is tinted a different color—yellow for joy, blue for sadness, purple for fear, red for anger, and green for disgust), but things begin to change, as Sadness starts to enter the picture a bit more prominently.  Riley’s father gets a job in San Francisco, and her family must now move across the country.  Soon, Sadness begins touching different memories, changing them from yellow to blue, and affecting Riley’s mood in the process.  Once Sadness starts touching Riley’s core memories, and Joy and Sadness get sucked into Riley’s subconscious, the adventure begins.

There are so many good things happening in Inside Out.  Pixar has always been known for telling stories that resonate on a deep emotional level, and their newest film is right up there with the best of them (Up, WALL·E, all three Toy Story films).  Not only are we watching Riley and hoping that everything will work out for her in her darkest hour (the film does indeed get dark at times, particularly as we see Riley struggle with her new environment and with the changes happening in her life), but we are also watching the amazing adventure happening inside her head, and seeing how what happens inside manifests itself on the outside.  We feel for Joy as her relationship with Sadness develops and matures.  We feel for Bing Bong (Richard Kind), Riley’s imaginary friend who steals every scene that he appears in.  We feel for Riley, as her relationship with her parents, which was once so open and honest, begins to crumble as she loses her ability to feel genuine happiness.

The animation in this film is absolutely stunning.  The world of San Francisco and of Riley’s life is incredibly realistic, from her new house, to her school, to the rain, to the broccoli on her pizza.  The realism on the outside helps give a stark contrast to the incredibly colorful and magical world created inside her head.  There is a scene, for example, in which Joy and Bing Bong board Riley’s “Train of Thought” (cute, yes?) as they attempt to travel from her subconscious back to her headquarters.  The train itself is beautiful, as its track magically appears before it as it travels.  In another scene, Joy, Sadness, and Bing Bong walk through Riley’s room of Abstract Thoughts.  Watching them change into different levels of abstraction is simultaneously frightening and delightful, as we wonder if they will make it out of there before abstracting into oblivion.

While Inside Out is a movie made for children, it is also geared just as much towards adults.  It never talks down to its audience, and it is not afraid to delve into some pretty heavy issues, like depression and loss.  It also deals incredibly well with relationship issues, particularly within Riley’s head, between Joy and Sadness.  At its core, the film is about how sadness is an integral part of life.  While Joy finds Sadness to be a nuisance throughout the film, she learns that Sadness is actually there for a reason.  Sadness helps shape Riley’s personality and helps navigate her through some of life’s most difficult moments.  Sadness also, perhaps ironically, provides some of the best comedy throughout the film—a scene in which Joy must drag Sadness through Riley’s subconscious comes to mind.  And while this internal struggle is occurring, we care just as deeply about Riley’s relationship with her mom and dad as we do between the emotions in her head.

Inside Out is easily one of Pixar’s best films to date, which would make it one of the best animated films to ever grace a screen.  Amy Poehler, Phyllis Smith, and Richard Kind do an outstanding job (as do the rest of the voice actors in the film) and the visuals make this one worth seeing on the big screen (3D, however, is not necessary).  You will feel every emotion depicted on the screen, and you will leave the theater feeling an utter sense of joy.