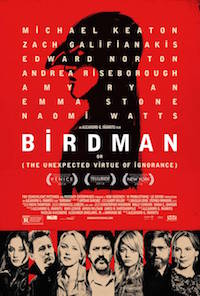 BIRDMAN or (THE UNEXPECTED VIRTUE OF IGNORANCE)

What The Wrestler did for Mickey Roarke, Birdman is likely to do for Michael Keaton.  The film is bizarre, funny, heartbreaking, chaotic, and taps into society’s obsession with fame, while exposing some real human truths.  Keaton is already getting a great deal of Oscar buzz, and with good reason.  People will be talking about Birdman for a while.

Keaton plays Riggan Thomson, a celebrity who (like Keaton) became famous for playing a superhero 20 years ago, and (not entirely unlike Keaton) has since vanished into obscurity.   The movie takes place during the few days prior to the opening of a play that is to open on Broadway, a play that has been adapted from Raymond Carver’s short story What We Talk About When We Talk About Love.  Riggan Thomson has written, directed, and stars in this play, in an attempt to reboot his career and prove to the world that he is still relevant and (more importantly) that he is, in fact, an artist.  When one of the lead actors of the play (Jeremy Shamos) gets injured in rehearsal, Thomson must find a replacement.  This replacement comes in the form of Mike Shiner (Edward Norton), a well-known and well-respected Broadway actor, and boyfriend of one of the play’s stars Lesley (played by Naomi Watts).  Throw into the mix Riggan’s twenty-something daughter Sam (played by Emma Stone, channeling her inner-Lindsay Lohan), and his ex-wife Sylvia (the always interesting Amy Ryan), and there is more than enough drama to go around.

Michael Keaton’s performance as aging and forgotten actor Riggan Thomson is fascinating to watch.  While he delivers plenty of monologues that are sure to be showcased on the night of the Academy Awards, what really drives his performance are the subtle moments throughout the film:  the pain in his face when his daughter breaks his heart with her hurtful words, the confusion he feels when Mike Shiner tells him that he’s a hack and that his dreams are based on nothing, the way in which he communicates with the (literal) voice inside his head.  Thomson is chasing a dragon that he does not quite understand, and the way Keaton portrays a vast range of emotional subtleties is what really makes his performance worth the price of admission.

The rest of the performances throughout the film are terrific, as well, particularly Edward Norton.  Norton’s Shiner is the perfect foil to Keaton’s Riggan.  Shiner is a true actor, and an artist, and a jerk.  He is tough and sarcastic and condescending to Riggan, and one scene later he is vulnerable and open to Riggan’s daughter Sam.  Zach Galifianakis, who plays Riggan’s lawyer Jake, also gives a great performance, and much more grounded and less broad than most of his previous work.  Bottom line, it is very entertaining to watch all of these actors work together.

Additionally, writer and director Alejandro González Iñárritu (best known for 21 Grams, Babel, and Biutiful) does some extremely interesting things behind the camera on Birdman.  The film begins with a long tracking shot that goes from Thomson in his dressing room and follows him all the way through the bowels of the Broadway theater, to the stage, and eventually back to his dressing room.  It’s impressive, and exhausting, and it would make Orson Welles proud.  In fact, most of the movie seems like one long tracking shot.  There are several other shots throughout the film that go from inside, to outside, from here, to there, and back again that help the film achieve an almost claustrophobic feeling, as we feel Riggan Thomson go from mildly disturbed to fully insane.

Birdman is not for everyone, and is one that likely gets better and better upon further viewings, but it is worth seeing in the theater.  The film, along with being a character-driven drama about a man’s descent into madness, is also an interesting commentary on society’s obsession with celebrity and the disconnect between fame and art.  See it when you get the chance, if only because it will be the film that helped re-launch Michael Keaton’s career.