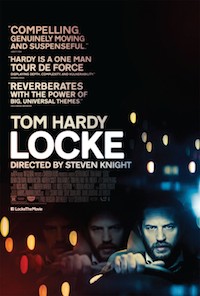 One of the most compelling films of the year spends its entire 85-minute runtime in a car.  Luckily, the man driving that car is Tom Hardy, one of the best actors working today, and the script is spectacular.  Locke will have you on the edge of your seat from start to finish, keeping you rooting for the increasingly hopeless fate of the protagonist behind the wheel.

The film involves Ivan Locke on the most stressful night of his life.  After receiving a phone call from a woman with whom he had an affair nearly nine months prior and who is going into labor with Locke’s baby that night, he makes the decision to be with her at the hospital instead of driving home to be with his family.  This decision sets in motion a dramatic sequence of events, as he must handle an enormous amount of pressure coming from his wife and two teen boys, his job (the biggest non-military cement pour in Europe’s history), and the soon-to-be mother of his soon-to-be child.

I will get to Tom Hardy’s performance in a moment, but to call this movie a one-man show is to not give the other performers enough credit.  While Tom Hardy is the only actor to appear on camera, the voices lent by the other performers in the film are just as enthralling.  We get an idea of the world outside of the car because of these performances.  Ruth Wilson as Locke’s wife, a woman blind-sided by the news that her husband was not only unfaithful, but is also about to become a father to another woman’s child; Andrew Scott as Donal, Locke’s employee who now must take over Locke’s duties in the biggest job of his career; Olivia Colman as petrified Bethan, about to give birth alone in a hospital and become a mother for the first time.  These actors, along with the remaining cast, make us care about the outside world and help make the stakes so high that we can feel them at every turn.

But back to Tom Hardy.  His performance as Ivan Locke, a man who is just trying to right a wrong, and pay for the most costly mistake of his entire life, will certainly be considered in next year’s Academy Awards season.  His performance is so compelling, so nuanced, so unpredictable.  A lesser actor could very easily have made Locke an unsympathetic man at the end of his rope, but Hardy gives him so much humanity and so many layers.  We spend the movie trying to figure this man out, trying to figure out what makes him tick.  Along with his relationships to each and every person on each and every phone conversation that he has throughout the film, he also has a relationship with his deceased father as if he were in the car with him.  Hardy brings so much life to Locke and turns him into one of the most fascinating and complex characters to grace a movie screen in years.

A film that takes place entirely in a car that ends up working on so many levels obviously has a script and a director to thank.  Steven Knight (known for writing the screenplays for critically acclaimed Eastern Promises and Dirty Pretty Things) wrote and directed Locke.  The way that the script builds and reveals just enough information as it moves along keeps the audience actively involved with its unfolding.  When it begins, we don’t know exactly where we are or what is going on.  Who is this man?  Who are these people he’s calling?  Where is he driving?  As we get answers to these questions, we also get more questions.  Deeper questions.  We become so fully invested that when the film is over, it feels like we are getting off an emotional roller coaster.  The script is a huge part of this, as is Knight’s directing style.  He keeps our interest in a visual way for 85 minutes while keeping us confined to the front seat of a car.  That’s no small task.

From Tom Hardy’s performance, to the mise-en-scène created in such a small space, to the tight script, Locke really is one not to miss.  While it is not yet available everywhere, if you happen to be in a city in which it is playing, you really must see it.  It will stay with you for a long time.