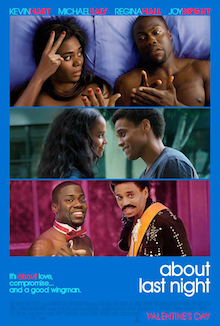 Kevin Hart has quietly become one of the biggest comedians in Hollywood.  January’s Ride Along has already made enough money to warrant a sequel, and About Last Night has made back three times its budget.  That being said, About Last Night, a retelling of David Mamet’s 1974 play Sexual Perversity in Chicago (which was made into a film also called About Last Night starring Rob Lowe in 1986) is fresh, funny, and full of charm.  Hart and the rest of the cast do a good job with the material and, while it may not be the most original romantic comedy ever (and the screenplay is certainly watered-down Mamet), it is a pleasant enough way to spend 100 minutes.

The film stars Michael Ealy and Kevin Hart as Danny and Bernie, a couple of thirty-something friends who enjoy drinking, meeting girls at bars, and drinking.  After a drunken night spent with Joan (Regina Hill), Bernie coordinates a second/double date with Joan, Danny, and Joan’s friend Debbie (Joy Bryant).  Danny and Debbie wind up dating and moving in together, while Bernie and Joan wind up dating and breaking up in dramatic fashion.  Will Bernie and Joan get back together?  Will Danny and Debbie’s storybook romance end up going south before an inevitable reunion?  I don’t want to give anything away, but…

Ealy does a nice job as Danny, a romantic at heart but not quite ready for a commitment. Joy Bryant and Regina Hall are also both funny and believable as Debbie and Joan.  But this movie really belongs to Kevin Hart, as several scenes are basically a stage for him to do stand-up, punctuated with lines by other actors.  He is funny and the type of humor that he is known for as a stand-up comedian translates pretty well to the big screen.  What really sets him apart from a lot of the other comedian-turned-actors is the emotional depth that he exhibits—it’s not like he’s going to win an Academy Award any time soon, but he isn’t one-dimensional.  Either way, he is likely to be a fixture in comedies for some time to come.

While the writing is decent (it is based on a David Mamet play, after all), it’s not great.  This is the second feature screenplay by Bachelorette writer Leslye Headland, and the seams show in this one.  There are several times throughout the movie in which a character will say something that is important for the progression of the story, but it is never backed up on the screen.  For example, at one point Debbie tells Joan that she doesn’t think Danny is ready for a commitment, based on how he has been acting.  The only problem is that we don’t really see that happen and we kind of just have to take the dialogue’s word for it.  It almost has to be spoon-fed for us to get to the next phase in the movie.  While this does not ruin the movie, it does make it considerably less fun to watch.

With a solid cast led by Kevin Hart and a funny (if not imperfect) script, About Last Night makes for a pretty good romantic comedy if you have a date this weekend.  If not, don’t beat yourself up if you wait until it shows up on Netflix.