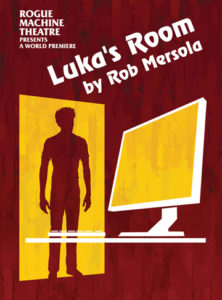 “(Name withheld) would like to thank Mr. Mersola for having the guts to write this play.”  (Found in an actor’s bio. Not a direct quote, btw, but you get the idea.)

I’m not always a big program reader before a play.  It’s rarely terribly interesting and sometimes gives a bit too much of the plot away…if I’m not familiar already.  After the play is a different story, however, certainly if I found the play to be exciting, thought provoking; a successful piece.

I’m not sure why, then, I decided to open the program and start perusing after sitting down to see the world premiere of Luka’s Room at the Rogue Machine Theatre, written by local playwright Rob Mersola.  I skimmed, but that sentence caught my eye.  I was ready and thrilled to see a gutsy play.

This was not a gutsy play, much to my dismay.  I feel the need to put that out there right now.  There are plenty of legitimate reasons to head to the Rogue Machine now, and always, but there were no GUTS hanging from this one.  The premise was moderately edgy.  19 year old Luka (Nick Marini) moves in with his rough-around-the-edges Italian grandmother, Franca (Joanna Lipari) on the brink of dementia.  Who then would think this loser move would lead to a sex life explosion for this young man?  Well it does…after moving into his father’s old room (complete with 80’s posters and paraphernalia.  Great job scenic designer: John Iacovelli) Luka discovered his jailbird Uncle Nick (Alex Fernandez) had also moved moved in down the hall.  Along with some sort of shady internet business, Nick also sells pot on the side.  Enter Angie (literally and figuratively) the sexually adventurous gal looking to score some weed, and the hookup between Luka and Angie is in the works.  Theatre with an edge?  Sure.  I wouldn’t bring a 10 year old, so I guess we can chalk that up to edgy.  There was surprise nudity, there were f-bombs, c-bombs and p-bombs.  But guts were not present.  And the playwright never promised guts…to his defense.  He did, however, say that he hoped the takeaway would be that the audience would get laid when they got home.  Yes, I read that in an interview.  I think both thoughts are equally off the mark.

This piece is really well acted.  Bravo to the entire cast.  This is a challenging feat always, and even harder when the script is less than stellar.  This is a home grown piece.  If you are a theatre enthusiast and true lover…this should be of value to you.  We all need to get out and support our local theatre artists.  And when you do that, you will see your fair share of fair or mediocre to terrible theatre.  It happens.  Luka’s room is also very well directed.  Joshua Bitton was spot on.  There was a great fight scene…my hat is off to Violence Designer (when did we create this title?) Ned Mochel.  I could go on in this vein, but this piece also touches on some important themes: dysfunction and how it’s passed along from generation to generation, money and it’s corrupting power over our morals, and the hard lesson that the internet is forever.  Things worthy of thought.

As I said before, there are legitimate reasons to get over there.  And I suggest you do.  This is not an uninteresting piece of theatre.  It just doesn’t pass the oh-so-important SO WHAT test.  And we all know how I feel about theatre that can’t answer, “So what?”… But still, check it out anyway.