“It is a privilege to follow your dreams in any city.”

In mid 2014, I packed my bags and left my lovely, happy life in Sydney to move to Los Angeles to further pursue acting. I had lived there briefly in 2011. My then US agent sent me out for castings and meetings, and I had retained one resounding feeling towards the cement city of LA—distain.

After this short visit in 2011, I returned to Sydney determined to continue with my lovely life, however I could not shake the feeling that if I didn’t suck it up and officially make the move to LA, I was going to regret it. So three years later I finally did it, somewhat begrudgingly, filled with a sense of naivety and very little cash. I found a crappy apartment in the worst part of Hollywood and hoped for the best. Two and a half years later, I’m still considered a newbie in Los Angeles, and I still learn about this town and industry every day.

There are, however, two things I can say with total certainty—moving to LA to act has been personally and professionally the hardest, most challenging experience of my life, and without doubt, the best and most rewarding one. People talk a lot of smack about LA, but if you’re considering the big move from the beautiful shores of Australia because you feel there is something here for you, then I urge you to take the risk.

Here are a few tips and tricks I learnt along the way. 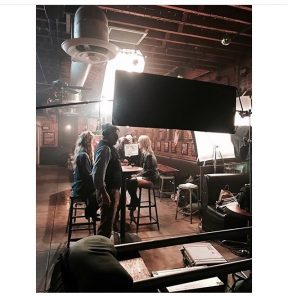 Putting her knowledge into action on the set of ‘Coven’

Be well informed. If you’re moving to LA, get yourself an IMDB Pro membership. It costs around $20 a month and allows you an overview of any legitimate agency, management company, production company, and actor worldwide. In the months leading up to my move, I spent hours researching. I learnt about acting schools, workshops, and classes I could take. There is a lot to learn but it will certainly prove useful once you arrive.

Moving to LA to act is not cheap. Aside from obvious costs, like a deposit on your apartment and rent, you may need to pay for the set up for the various casting sites that your agencies uses to submit for jobs. Some use up to 3-4 sites to submit you. You will likely need new headshots, as US headshots are different stylistically to the Australian standard. Popular headshot photographers can range from $500- $1000. Acting classes start at $275 and easily go up to $600 a month. If you do need a side-hustle job once you arrive, you may need some breathing room in case you can’t get a job straight away. It can be very competitive for serving and bartending jobs in popular venues and not as easy as it can be in Australia to get a casual job.

It takes time and patience to build an acting career—you need to be resilient and self-believing. Some actors move to LA and book work straight away, for some it can take a lot longer. I have heard stories of incredible actors not booking work for the first five years of living here. There are a lot of actors here and relocating can mean starting at the bottom. Your agency may send you out for short films at first and smaller projects. Auditioning in LA can be daunting, not everyone is great at it straight away. If you do want to better master the art of auditioning, there are classes you can take in LA that teach you cold reading as a technique and help you to be present in the room. 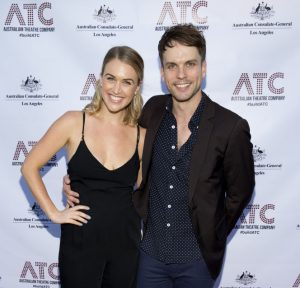 “Hustle or Die.” Miranda on the red carpet in LA for the Aussie film ‘Ruben Guthrie’

LA is the Olympics of acting. Everywhere you look there are talented, wildly attractive people. One thing that can really set you apart is hard work. You have to do something for your acting everyday. Set yourself goals,. If you write, you can make your own content. There are countless classes and casting director workshops you can take. If you find that you are not auditioning a lot when you first arrive, you can self-submit for jobs on most casting sites. Don’t just put your career in someone else’s hands; representation is obviously important, but there is so much you can do yourself.

People love to portray LA as a town filled with vegan, Instagram self-obsessed humans. Really, LA is what you make it. It is not Australia; there are some pretty big differences, but it is okay to love both places. Some of the best people I know live here. They are kind and supportive of each other creatively, and you should do the same. LA gives back what you put in; see the endless potential and possibility that living in LA allows you. Be inspired by this.

It is a privilege to follow your dreams in any city, to be able to pursue the life you dream for yourself. This is a luxury not everyone is afforded, whether it be because of personal fear or simply circumstance. Many people in the world do not get to do this and it is important to be grateful for the opportunity. If you are brave enough to move to another country to pursue something, then I commend your courageousness. Things will likely not go the way you imagine them—my time in LA continues to be a rollercoaster of highs and lows, but I feel incredibly lucky to live as an actor in this inspiring town and I wish the same for you.

“I would rather regret the things I have done, than those I have not.”

– Lucille Ball (and my mother who regularly says this to me)

Miranda O’Hare is an Australian actress and writer living in LA.Her recent credits include playing the lead role of Ruby in Australian feature film Indigo Lake, set for cinematic release in April 2017. She also plays Jax, one of four female leads in US horror/thriller film Coven also to be released later this year. Miranda is currently shooting series Killing The Cure, playing the female lead Adrianna. The series shot all over the world, including Africa, China, London and the States and set for release in 2018.