John O’Hare Studios: To Be Or Not To Be a Method Actor, Or Method Acting Gone Wrong

There was a lot of reporting on Jared Leto’s horrible behavior on the set of Suicide Squad. Social media went zany about the exploitative dangers of “method acting” and its acolytes. It has been alleged that he claimed to be using these techniques to “get into role” for the Joker – sending used condoms, and a rat and a dead pig to fellow cast members and crew.
There may have been a practical context of which we are not privy, which may justify his stated pranks, but if we are to believe media hype, then we need to analyse this so-called acting methodology.I must state categorically that Jared Leto’s reported jerky behavior is NOT “method acting,” it is punking!

Some are quick to dis this process of acting; sometimes a lack of understanding can lead to hysterics in the media. More often than not, this is as a result of misinformation, which leads many to wrongly judge what method acting truly is. Some who should know better also jump onto headline-grabbing bandwagons.

It is with sad regret that one such unverified article (which gained traction in Australia recently) entitled Hollywood Has Ruined Method Acting” was posted on the usually reliable SBS Movies website. It was overtly sensational and inaccurate in its depiction of the Stanislavsky Method.

Many of my acting students were confused by the article and one or two lost confidence in their personal process as a result.

Let’s get a few things straight and redress the hype, shall we? 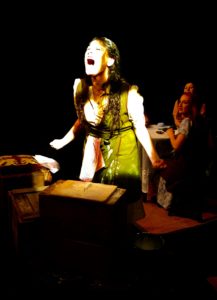 METHOD ACTING IS JUST THAT: A METHOD

Stanislavsky’s Method acting is a comprehensive system of training, originally evolved at the first Actor’s Studio at the Moscow Arts Theatre.

The exercises developed by Leopold Sulerzitsky, Michael Chekhov, Stanislavsky, and others at the first studio were experimental improvisations designed to inspire creativity. Other exercises evolved, which addressed blocks in an actor’s impressive and expressive abilities.

Stanislavsky observed that actors he respected shared certain qualities. There was a kind of aura around them onstage. Audiences were drawn to these actors and their performances. They were relaxed, yet at the same time filled with concentrated energy, completely involved in the moment. Stanislavsky called this inspired artistic condition the “creative state.”

As artistic director of the MAT, he set up an acting lab, the first studio. His goal was to develop a “method” to achieve this creative state of being consistently. Yoga, prana breathing, relaxation, meditation, and visualization were essential disciplines in the Stanislavsky method.

Stanislavsky’s triad: Relaxation, Concentration, and Imagination are the initial steps in acquiring the creative state of being.

Did Jared Leto incorporate these “method acting” techniques into his “getting into role” process?

If he didn’t, he’s not not a method actor.

“Love the art in yourself, not yourself in the art.”

There in lies the lesson.

Best wishes and chookas to you being able to achieve your own creative state of being whenever you perform.