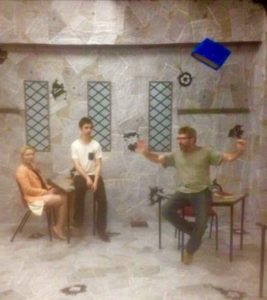 My name is John O’Hare and I will be writing each blog directly from my actor’s studio here in Sydney.

Every month, my blog will be dealing directly with the questions and issues on the actor’s craft. We’ll be analysing and solving the problems that continually come up for my actors and myself during studio workshops and on the rehearsal room floor. Each lesson will be current and immediate, and are sourced from real life situations as they occur.

My plan is to share my experience and knowledge of the most common acting blocks, and issues that stifle talented actors on a regular basis. One of the chief and rudimentary tasks of this studio blog is to create an atmosphere of peaceful collaboration, general ease, and simplicity.

Through your ability to observe the fundamental principles of the creative work of stage and screen, namely, the workings of your own heart and the nature of your own passions, you can identify the main stimulus of an actor’s life. Professional actors, many who’ve been working for a number of years, still come up against blocks toward their creative state, which inhibit them from sharing their gifts and talents during rehearsals, in auditions and in performance, both on the stage and screen.

For example, let’s talk about an acting block that came up yesterday: the feeling of being lost onstage.

During a rehearsal of Dancing at Lughnasa by Brian Friel (also check out the film version starring Meryl Streep) in my studio yesterday an actress playing Chris stopped halfway through the romantic scene with the actor playing Gerry and self consciously giggled, cursed, apologised, then continued to act the scene, making very little sense of the words or what she was doing.

(From here on in, I’ll refer to all performers with whom I’m working as “the actor.”)

I let the scene finish and remained silent for two or three minutes to allow the actors to gather their thoughts and settle back into the room.

“How did you feel that went?” I asked.

There were general sounds of positive and negative responses to my question. The actor that giggled and swore during the love scene said she thought it was, “kind of okay.”

I agreed it “kind of” was, at a very basic level. Meaning they all knew their lines, had been working hard on their accents, and looked authentic in their period costumes on a marvellous set. And you know what comes next?

“But tell me why you are feeling self-conscious, dropping out of the given circumstances: time and place, relationship, emotional state, character, and the many other factors that make up the world of the play Dancing at Lughnasa?”

This is one of the most common heard phrases in the world of acting: “I feel lost.”

“Because I’m tense, not relaxed?”

“Because I don’t know what I’m doing up here. I’ve spent half an hour doing relaxation exercises, working on my character and emotional preparation, but no matter, once the scene starts, I tense up and I’m lost.”

This is a conversation that I feel I’ve had hundreds of times on film sets and in the theatre. What is the actor’s dilemma? Have a think about it for a moment; has this ever happened to you or an actor you’re working with? The answer to this perennial actor’s nightmare is much simpler than many of us realise. At the root of most acting blocks is a disconnected concentration in the form of confused focus of attention.

In my next blog, I will go into greater depth and continue discussing the actor’s craft from a practical point of view. I will set out what I mean by focused attention, some simple exercises to develop and maintain it, and how to access it when you need to. Armed with this basic, but critical skill in an actor’s toolkit, we can then explore what happens onstage and how to go from that feeling of being lost, to the feeling of belonging and connection.

For those who wish to do some “homework” before my next blog, I suggest you look at An Actor Prepares by Stanislavsky and The Actor and the Target by Declan Donnellan. Alternatively, if you would like to continue this conversation or have any personal acting blocks you would like to share, please feel free to join the conversation on Twitter @johnohare7.

Thanks for stopping by and I look forward to working with you soon.