John O’Hare Studios – ‘Acting From the Heart’ Acting and Emotions 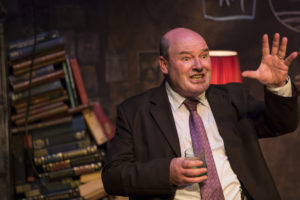 This month I would like to begin a discussion about acting emotions.

I will start the analysis with a question: Does the actor have to feel the emotions they portray in a character?

During our Shakespeare Intensive workshop last weekend the actress playing Beatrice from ‘Much Ado’ broke down halfway through her ‘Kill Claudio’ scene.

I replied: “No, I’m not interested in what you feel right now, I want to engage emotionally with the drama of the story. The stakes of the play will be reduced if you ask me to become involved with your (character’s) personal crisis in a naturalistic sense.”

And herein lies the dilemma for the actor whose personal quest is emotional truth whilst the director, (the audience of one) is trying to balance moment to moment truth with the integrity of the drama as a whole. The actor today faces the dilemma of how far they can go with ‘acting from the heart’ without losing their head.

As my old acting teacher Lisle Jones told me, “what an actor needs onstage is a cool head and a warm heart.”

Do you remember the often quoted anecdote about Dustin Hoffman?

Hoffman decided to stay awake for 36 hours to feel just like his character Babe Levy. According to the script of Marathon Man he had not seen a bed for three days. When Hoffman’s co-star, Sir Laurence Olivier heard this, he remarked wryly: “Have you not slept? Oh, dear boy, why don’t you just act!”

This invites the question: Does the great actor actually feel the characters emotions when they are performing onstage to a live audience?

However, the real question is: Why is this dilemma still such an important issue in discussing the art of acting?

Lets put this analysis in an historical context.

Konstantin Stanislavsky looms large over our contemporary approach to acting. He was seeking ‘a science of acting’ based on inner truth, truth on stage and emotional truth. His early work on ’emotion memory’ has left a deeply established legacy on acting styles in the United States.

Richard Boleslavsky was the first disciple of Stanislavsky to teach the emotion memory and inner concentration methods when he emigrated to New York in 1922. Students of Boleslavsky at the time were Lee Strasberg and Stella Adler, founding members of the Group Theatre which modeled itself after the first studio at the Moscow Arts Theatre. Lee Strasberg’s focus was on true emotion, ‘being real’ and personalised emotions paralleling character emotions. According to Strasberg; “Once the actor is internally aroused, they must passionately ‘live through’ those emotions that are imagined to be experienced by the character being portrayed.”

In 1934 after spending time in Paris working with Stanislavsky, Adler argued with Strasberg about there being too much emphasis at the Group Theatre on emotion memory and that they were distorting Stanislavsky’s ‘affective memory’ exercises by focusing on the actor’s personalised emotional circumstances. Lee Strasberg rebuffed Adler in a Group Theatre company meeting saying that (sic) “for the American actor, what I have to teach was preferable to whatever Stanislavsky might be doing in Moscow or Paris.”

Maybe he had a point – many great American actors of that generation came out of the Group Theatre and subsequently the Actor’s Studio (run by Strasberg) such as Marlon Brando, Marilyn Monroe, Paul Newman, James Dean, Joanne Woodward, Kim Stanley, and later Al Pacino to name but a few.

Actors from ‘The Studio’ became the superstars of the day; suddenly ‘Method Acting’ was real acting, everything else was fake.

This has been the essence of actor training to this day. However, when an actor is live onstage in front of an audience what is actually happening? Do actors actually feel the character’s emotions according to the given circumstances? 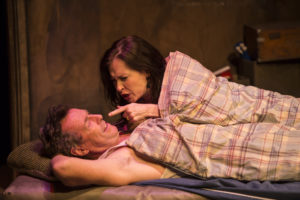 Kim Lewis and Patrick Dickson in The Gigli Concert by Tom Murphy; Directed by John O’Hare

Many professional actors I work with admit that this never happens to them whilst performing. Emotional things do happen, yes. But not ’emotional identification’ with character. At any rate not in performance – as part of the rehearsal process briefly – yes. But not onstage in front of an audience.

This raises a number of vital questions doesn’t it?

Dr. Elly A. Konijn in her study of Acting and Emotions poses these four questions: (from Amsterdam University Press)