Interview with Ben and Chris Blaine, The Blaine Brothers

The award-winning feature film by Chris and Ben Blaine, Nina Forever, has just been in the cinemas in London, after it debuted at SXSW and later FrightFest in London, amongst other festivals. StudioCanal picked it up for UK distribution and the feature has been storming it in the UK and abroad. We caught up with the brothers behind the award winning feature film to find out about how this incredible feature came to be, what’s next and what you can learn about feature filmmaking after you’ve made your debut film. 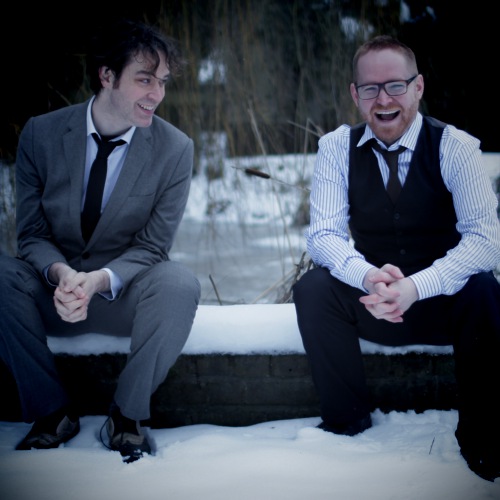 CNI: Congratulations on Nina Forever. It’s taking the independent film arena by storm. And made it’s way to SXSW. How do you feel about the success of the film?

Blaine Brothers: Relieved, honoured, all the nice emotions. When we started writing we told ourselves it was a film that no one would like but us. That wasn’t strictly true, we always knew there was an audience that would connect to it. But we also knew that the way we needed to tell the story went directly against a lot of industry logic. This isn’t an easy film to sell. The coffin isn’t the only box that Nina refuses to lie easy in.

Creatively it was very hard to achieve what we aspired to on the money we had but even when we felt the edit starting to come close to our ambition for the thing, we still had no real idea how audiences and critics would respond. So yeah, it’s been a huge relief that people have understood it. If nothing else, it feels really nice to prove that audiences are smarter than they are often given credit for.

Casting Networks: You had Fiona O’Shaughnessy in the film, who is an incredible actor and well-known for Utopia, among other shows. How did you cast her?

BB: In basically the most normal way you’d cast anyone. Our first piece of brilliant luck was meeting our casting director Emily Tilelli who found all three of our leads. Emily saw Fi on Utopia and rang us as the credits rolled on Ep.1 saying “that’s our Nina!” But we doubted an actress who was on billboards across the country would return our call.

In fact, Fi did initially pass on the role, but luckily we’d made the choice to send out the entire script to everyone. This isn’t normally done but we all felt we had to put the madness in context. So Fiona read the whole film and it sat in her head and despite her initial doubts she couldn’t shake it off. A couple of weeks later, she was having dinner with a friend and apparently they told her to either do the film or stop going on about it. She rang us after that and we talked through her concerns, then she jumped on a plane from Dublin and came and auditioned. It was clear from that point on that we had our Nina.

CNI: How did it come about that you joined up with Cassandra Sigsgaard (on the board of WFTV) as your producer on board Nina Forever?

BB: The new Chair of WFTV in fact! We met Cass in 2008 on a talent scheme run during the London Film Festival called “Think, Shoot, Distribute.” Our year included Tess Morris (Man Up) and Andrew Haigh (Weekend, 45 Years). Cassandra had already seen our short film Hallo Panda and we hit it off. At that point, our feature thoughts were all in another direction, which didn’t work for her, but about a year later we wrote up a draft of Hallo Panda as a feature film and had a section read at BAFTA Rocliffe. That was great, and we had a couple of grand sounding offers from bigger producers, but only Cass seemed to really understand that we weren’t trying make Zookeeper. She really seemed to get our voice as storytellers, and so we optioned the project to her even though she had the least money. Panda is a much more expensive script and not one anyone in the industry was keen to trust us with. We actually thought Nina would be the end of our relationship with Cass, as she’d already passed on the idea in outline form, but when she read the script she could see how true to our voice it was, and she sort of refused to let us talk to anyone else about it.

CNI: It’s such a fascinating story, and definitely not your typical horror. However did you come up with the concept?

BB: Nina just sort of fell onto the page one day. Nina’s a very strong character, very demanding. There’d been an earlier unfinished script about Rob and his relationship with the parents of his dead girlfriend, but the script built around an empty space didn’t do much and lurked in the bottom drawer. Then, one day Ben was walking up a hill from Barnet train station and Nina just muscled her way into his thoughts. A lot of her first appearance is straight from those notes. It took a hell of a lot of work to make sense of it all and turn into something that worked as a film, but that’s where the concept came from – she just demanded it.

CNI: And how long have you both been working as directors and writers together?

BB: Depends where you think that collaboration starts, but we made our first film together in the summer of 1996. It was a feature length adaptation of the entire Bible, starring us and about six of our friends. It’s two and a half hours long and contains nearly 5 minutes of genuinely funny material, but our school banned it (for blasphemy, not because of a higher standard of comedy) which created an amazing black market. As a result we made our money back.

CNI: Do you want to continue making your own work only, or would you welcome scripts from writers and producers?

BB: Our way of working is based in collaboration. Starts between the pair of us, but pretty soon it has to slosh out of our skulls and into everyone else’s. So we LOVE working on material we have’t written. We also would love to find directors interested in shooting our scripts!

For a long time we’ve chased other people’s scripts, but all the good ones have always gone to established directors. One of the many nice things about Nina is that we’re now finally getting offered projects that we actually enjoy. In fact, we’re actually signed up to direct an original screenplay by Irvine Welsh and his film writing partner Dean Cavanagh – so yeah, our door is always open.

CNI: What would you say is the biggest challenge right now in the UK with regards to making a relatively low budget independent feature?

BB: Low and micro budget filmmaking should be the place where artists and audiences can take risks. Too often though, micro budget films attempt to apply scaled down blockbuster logic. They lock themselves in a genre and an established narrative shape, they cram in TV “names,” imagining this can work in the way Hollywood A-list names will. A micro budget film is not a mini-blockbuster; like quantum physics, everything down here works in a very different way. So yeah, the biggest challenge is your own mindset.

CNI: If you were to give your fellow filmmakers two pieces of advice, in hindsight, what would that be?

BB: Don’t wait for anyone else’s approval except your own. That’s Ben’s advice, as there’s two of us I’m going to let Chris give the other piece. But I feel like we spent a long time in our lives waiting for some organisation or magazine or person to say “these guys are really great,” and open all the doors for us. That never happened and never was going to happen. We never asked anyone if they’d let us make Nina Forever, we just told everyone that we were making it and that they’d be welcome to help out. That’s all you’re ever asking, though it’s still often hard to remember that.

Chris would say allow yourself time over getting your hands on cool shit. When you’re doing work for someone else, it’s easy to point out that you only get to choose two of Time, Money, or Quality. But in low- budget filmmaking, the easiest way to save money is to restrict the time you get with cool shit, like cameras, jibs, edit suites, vfx, grading suites, cast, and crew, and to forget that you’ve then chosen Time and Money as your two most important elements of the production, rather than Quality. We were lucky with Nina Forever, in that Cass helped us eke out more time on set and a lot more time in post, which did mean we were restricted in the cool stuff we got to play with, and did nearly all of the picture post ourselves at home, but meant we could spend the time the film needed to get it right. (The award-winning sound design was done by the brilliant Steve Bond, and the music composed by Dan Teper who’s a genius – both were on board with taking as much time as we needed in order to get the film as good as we possibly could.)

CNI: What’s next for you both?

BB: We are working with Irvine and Dean on their female driven Leith-set heist movie and writing a new script of our own, which Cassandra is producing. We’re also thinking a lot about long-form TV ideas, all of which are really weird. Really, really weird. It’s delightful that finally we’re going into meetings and it’s only when we get to our strangest ideas that people’s eyes light up.