We were delighted this month to interview up and coming actor Brad Moore, who has just had a starring role in Golden Years and the feature Gloves Off coming out soon. His debut was in The Rise, featuring Timothy Spall. Here, he shares with Casting Networks what it’s like to settle into an acting career in the second phase of your life, ways to be clever about securing roles, and some fun moments in Cannes.

Casting Networks: So first things first, Brad. You recently starred in Golden Years. Can you tell us a little more about your role in this film and how this film came about? 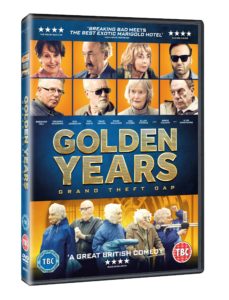 Brad Moore: I was introduced to the director, John Miller, and co- writer, Nick Knowles, from DIY SOS at the Cannes film festival by my friend, the producer, Mark Foligno. They were out there trying to raise finance for the film. I was there trying to find work, but mostly spending money I didn’t have on drinks that I couldn’t afford! Anyway, they told me all about the film’s premise and the character, and it was of course immediately something I wanted to be involved with. Pensioners robbing banks? What’s not to like?!!  So I quickly proceeded to deploy my usual technique of running some “early sketch” improvisations of what I thought the character would be like (couple of drinks will help with this risky strategy!). So after a few turns from me, John and I clicked on who we thought DC Keith Stringer would be and they cast me. We then had a few more character sessions before Stringer was fully formed.

My character “Stringer” is very much the pantomime villain of the piece. He is a narcissistic, self- obsessed, spray tanned metrosexual! Devious and very ambitious. He’s very vain and he thinks he is Don Johnson from the‘80s TV show Miami Vice, but sadly comes off somewhere between Simon Cowell and Fonzie. On the trail of the heroes, we have the good cop Sid (played by Alun Armstrong) and I’m the bad cop trying to catch the protagonist, and at the same time bully Sid out of his job. What’s really funny is that Stringer thinks the robbers are a crack team of military trained commandos, a top crew that happen to wear old people masks when robbing the banks, but the reality (and crux of the story) is there are, in fact, old people underneath the old people masks!

CNI: We love the premise of Golden Years, And it’s littered with some of the UK’s finest in older actors. How did this amazing cast become attached and what’s planned for it after it’s cinema release? 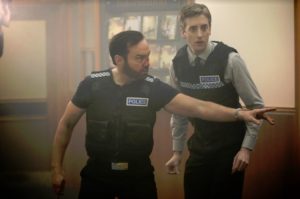 BM: I was so so lucky to be part of this project. The ensemble cast are some of the country’s best actors I grew up watching on TV. Yosser Hughe’s head butt in Alan Bleasdale’s The Boys from the Black Stuff still haunts me now, as does Una Stubbs quiet creepy Aunt Sally from Wurzel Gummage!!

I was slightly instrumental in securing cast. A year or so after meeting the guys in Cannes, they were still trying to raise finance and struggling to find a lead actor for the film. By this time I had become friends with Nick and John, so the producer, Mark Foligno, and I approached Bernard Hill as I had just shot the film North vs. South in my first lead role with him. He loved script and came onboard. Once they had Bernard attached, the casting domino effect took place and this amazing cast started to attach one by one. Once you have a strong and respected actor in the lead role, then other actors feel artistically underpinned in a way and the confidence in the project goes up.

CNI: What’s been most interesting in tracking your career is that you started much later than the typical actor starts acting. And since then you’ve exploded into the independent filmmaking scene starting with the BAFTA nominated The Rise alongside Timothy Spall, and then really worked your way quickly up the film ladder. What prompted the career change?

BM: When I was 10 we lived in the same road in north London as the actress Pauline Quirk from Birds of a Feather. Several of us would play acting games together on one of the few cobbled streets left in London. We must have looked like something from Oliver Twist, but it kept us entertained in the absence of Pokémon GO. The buzz I got from performing never really left me, I just suppressed it, and I didn’t do any acting at all until much later in life. I had different careers, but nothing ever felt right. I was always searching for ways to show off, so the pub was my stage for many years! This, as you can imagine, often got me into a lot of trouble. Then I had my wonderful son and, as all parents do, I started telling him bedtime stories with a glass of wine in one hand and Roald Dahl in the other. As he got a little older we started to make up our own stories, playing with the characters and their voices together. He loved it and I got such a buzz from entertaining him I realised it was the same buzz I felt on the street in North London. So it was my son, plus the fear of not following my heart, that finally gave me the courage to start acting.

CNI: And in terms of starting an acting career at 40, what would your advice be to any other actors out there considering doing the same?

BM: Work at all costs. When you are starting out, hunt down the smaller budget films and short films. You are not gonna get paid and probably don’t deserve to at this stage, so ignore that and just get on screen. Acting is a doing sport, so you must get screen or stage time. There’s a big short film community in London and if you’re any good in a short, you get invited to perform in another one! Its like six degrees of separation. Short films don’t always come out the way you’re hoping, but they teach you the rhythm of being on set, the etiquette required, and you are generally surrounded by supportive people all working for nothing but love of film, so you have an environment to learn and take some risks.

Major stars still act in short films if they love the script. I just had the pleasure of being cast in short film next to Rebecca Hall (Vicky Christina Barcelona), and this was given to me off the back of another low budget short film that the producer saw me in. So you never know where a short film may take you. Starting so late, I personally felt that I didn’t have time to go to drama school, so the other option was to throw myself in the deep end as much as possible. So I went on the stand up comedy circuit for two years whilst performing in around 20 short films at the same time. Scary, but was turbo training!!

CNI: What is your favourite part of being a screen actor? 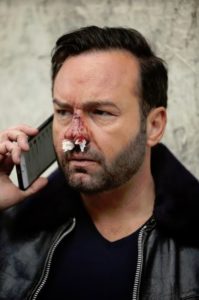 BM: All of it really. Im in love with acting and storytelling. I’m happiest when filming, as it makes me feel creative, purposeful, and normal. I strangely feel odd when in the real world, and normal when in a make believe world! Did I mention I’m a bit crazy? I love the prep, using your imagination to try create a unique human being. If I had to be specific, I would say the biggest pleasure would be performing a scene with a legend like Steven Berkoff. I’m very lucky to have done that.

CNI: And when looking at prospective scripts now, what do you find interests you?

BM: I want to really enjoy the script and believe the universe it is set in and the story it wants to tell. It needs to be a page turner, and if you find yourself putting it down to watch a bit of XFactor, that’s probably a bad sign! I need to feel that I can breath life into the character I’m being considered for and feel confident I know how that character should serve the story.

CNI: What else do you have coming up this year, and leading into 2017?

BM: I have a horror film coming out at the end of the year called Writers Retreat. It’s another low budget film, which was shot on an island in Essex with Chris Fairbanks and Poppy Drayton. It’s a Poirot-esque whodunnit where one of the characters starts bumping the others off in nasty fashion! I’ve just completed a crime thriller thats also comedic for Universal alongside Vincent Regan and directed by Sacha Bennett called Tango1 that I think is completed now and due out soon. I have also just co-written my first feature film called Gloves Off that is in post production right now. Gloves Off is a boxing comedy that I perform in with another cracking ensemble cast including Ricky Tomlinson, Alexis Sayle, Paul Barber, and the lovely Denise Van Outen. It is a crazy kinda madcap film and was easily the most fun I’ve had on a shoot so far.

CNI: And finally, if you could offer one piece of final advice to budding young actors out there, what would it be?

BM: For young people today, I would say make sure you know why you want to act. If it is just for fame, then switch to presenting or reality TV or shag someone famous! Acting is a slog and so many kids are just fame obsessed today, it is really dangerous. But if its because you truly love acting and performing, then chase it with all your heart and don’t quit at the first set back or hurdle. It’s a tough game, but the rewards are so wonderful in all sorts of fulfilling ways.

Brad Moore, whose acting career started at only 40, has quickly built an impressive profile starting with a role in the breakthrough BAFTA winning film THE RISE acting alongside Timothy Spall after which he starred in the urban action flick MONTANA alongside Lars Mikkelsen. Last year Brad played his first lead role in crime thriller NORTHVSOUTH and can be seen in cinemas right now in the comedy caper GOLDEN YEARS. To see more about Brad click here.