Butterflies In the Theatre 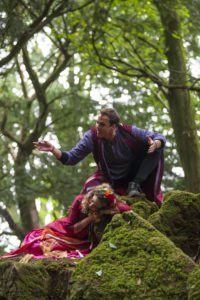 A Midsummer Nights Dream by the Butterfly Theatre Company performed at Puzzlewood, Forest of Dean. Photo by David Broadbent.

We interviewed Carla-Marie Metcalfe of Butterfly Theatre, a London based group, whose mission is “Breathing new life into much loved texts, immerse audiences in classic tales, using unusual spaces to set our story – such as caves, castles and woodlands – and truthful, responsive acting to excite and delight in every moment.” They specialise in the Meisner Technique and have worked across the UK and Germany.

Casting Networks: Can you tell us a little bit about the theatre company you’re a part of?

Carla-Marie Metcalfe: Butterfly are a London based theatre company who specialise is site-responsive theatre. We have travelled both nationally and internationally performing in some of the most unique and historic venues from Caves to Castles, Forests to Medieval towns. Breathing new life into classic texts, Butterfly interact with the amazing spaces and immerse the audiences into these truly alive and moment to moment promenade style performances. Whereas other companies simply erect a stage in the grounds, Butterfly are passionate about making each place we visit very much a part of the performance rather than just a backdrop and giving the local communities the chance to experience the history and culture on their doorstep in a truly memorable and magical way.

CNI: How long have you been part of this company?

CMM: I have been working with Butterfly officially since the beginning of 2014 when I was cast in my first show with them as an actor. Butterfly’s Artistic Director, Aileen Gonsalves, was the head of my course at Arts Ed and so during my training we were given the opportunity to work with Butterfly and experience the unique way in which they use meisner techniques to create truthful, alive and moment to moment acting. I completely fell in love with this way of working so when I was asked to audition for them in early 2014, I jumped at the chance. Since then I have been working with them both as an actor as well as more recently a producer.

CNI: From an acting perspective, why do you think it’s a good idea for actors to do something like this?

CMM: I think if actors get the opportunity to gain some experience in a different role within a theatre company such as director or producer, it is a good opportunity to take. Firstly it gives you a great insight into the roles of the people you work with regularly as an actor and the hard work that goes in to putting on a production behind the scenes. I also don’t see any disadvantage in expanding your skill set and trying something new.
For me I discovered a lot about myself during this experience, I realised that I had real strengths within the production side of things and so has given me the confidence to explore other creative avenues should the opportunities come up in the future. I feel like actors are often scared to explore other roles within theatre as they feel that people need to define them as one thing, I would say that just because you are exploring other avenues does not make you any less serious about developing your acting career, if anything the experience will only enhance your knowledge. Acting is the kind of profession that can leave you without work for certain periods of time when you are in between jobs etc, so I think it is great to be proactive and have other creative outlets to keep you busy.
CNI: An Ideal Husband is one of the classics. What’s your role in the play?

CMM: I play the role of Mabel Chiltern in the play, the quick witted younger sister of Sir Robert Chiltern who falls for the charming bachelor Lord Gorring. My very first job with Butterfly back in 2014 was An Ideal Husband playing the role of Mabel so this was a great opportunity to revisit the role 2 years on. I felt like I could bring so much more to the role this time round as I was more experienced and knew the character well. This is such a fun play and was simply perfect for the beautiful Georgian town house venue that we were performing it in. 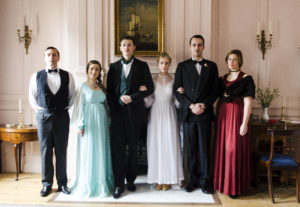 It’s an interesting choice going to Jersey. Why did you and the company decide to put it on here?

CMM: One of the other Butterfly shows I was involved in was a production of Macbeth in a medieval castle in Germany, and I have to say that this was my real inspiration for bringing Butterfly to Jersey. I was blown away with the production and how it had the thrill of a live theatre show but with the backdrop of a film set. As a Jersey girl myself having grown up on the island, I knew there were some equally stunning venues there which I suggested we visit. Myself, Aileen our Artistic director and Kate our Producer went over to scout for venues and relationships just developed from there. Not only did I have venues in mind when it came to choosing Jersey but I was also passionate about sharing the work that Butterfly do with the Jersey community. As a young girl growing up there I was always frustrated by the lack of opportunities and exciting theatre experiences on the island, site specific theatre is a particularly new concept for a lot of people there so I wanted to introduce them to this unique and exciting way of enjoying theatre. This was a bit of a risk however as we were unsure how this would be received by the audiences but fortunately people loved it and soon word spread and shows were selling out.

As a busy London based actress, what do you invest most of your time and energy on?

CMM: One thing that I feel is important to invest time into as an actor is making sure you have a strong portfolio. By this I mean making sure you have a great showreel, voicereel, website etc that you have ready to show people. These may well be the things that set you apart from others so worthwhile investing time into them to make sure you can show off your skills in the best way possible.

CNI: And if you had one piece of advice for actors out there thinking about joining a theatre company, what would it be?

CMM: The thing that makes me work so well with Butterfly is the fact that I am passionate about the work they do and the way they work. If you are thinking about joining a theatre company, show them that you are passionate and enthusiastic about the work they create and why you want to work with them specifically over other companies, this personal edge will make you stand out and will make them far more likely to want to work with you.

CNI: What’s next up for you personally, now that you have finished this latest sell out show with Butterfly Theatre?

CMM: Since returning from Jersey I have been involved in a couple of exciting projects including streaming live shakespeare scenes with Grassroots Shakespeare Theatre Company in association with GoPro and Twitter UK in celebration of Shakespeare’s 400 as well as filming an online Pringles advert. I am also going to be joining Butterfly once again in a production of A Midsummer Nights Dream in two different locations at the end of June. In the meantime I am currently looking for representation so will be keeping busy with my agent search.

Carla-Marie Metcalfe: After a background in Contemporary and Devised Theatre, Carla-Marie went on to train at Arts Ed, London. Since joining Butterfly Theatre Company, Carla-Marie’s previous roles include Mabel (An Ideal Husband, 2014 & 2016 productions), Celia (As you Like it), Witch 2 (Macbeth, German tour), Cecily (The Importance of being Earnest) and Hermia (A Midsummer Nights Dream). Carla-Marie is also an Associate Producer for Butterfly where she co-produced their production of The Lesson at the St James Theatre in 2015 and has since gone on to produce the 2016 production of An Ideal Husband at 16 New Street, Jersey.