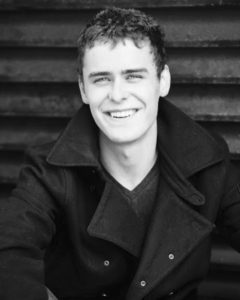 “I think it’s important to have something to keep you grounded.” – Alec Snow

You may know Alec Snow as Home and Away’s Matt Page, the troubled teen who moved to Summer Bay and caused a stir. However, aside from starring in Australia’s most popular TV soap opera, Alec is also a brilliant stage actor, with his role as Tim in Holding the Man at LaBoite Theatre Company in Brisbane earning him rave reviews and industry admiration. If that wasn’t enough, Alec fronts the band Interim, who are currently working on their debut album.

This month, I spoke to Alec about how his journey as an actor has affected his view on health and fitness.

1. What do you do to keep your mind and body in shape?

The way I keep my mind and body in shape is through yoga. For me it’s a perfect balance between the spiritual and the physical. Although I do think finding the right teacher is important. Someone who teaches in a way that suits you and makes you enjoy the practice while you are doing it.

Yoga is something that never fails to make me feel great. There’s never been a class that I’ve walked out of at the end and been like, “Oh, I wish I didn’t just do that.”

2. Has your life in the public eye and your rigorous schedule on HAA changed the way you view your health and wellbeing?

Home and Away has definitely been a part of changing my well-being and health. There can be some big days of filming on set and I found that I had to do something physical that could help me wind down. I chose yoga. When I started, it just became my moving meditation and allowed me to let go and be present while I did it. That’s why I love it. And especially in this industry, I think it’s important to have something to keep you grounded.

3. As we all know, our body is our toolbox when it comes to acting. What advice would you give to actors looking to create and upkeep a well performing efficient instrument?

I think it’s important for actors to find some kind of activity that allows them to be in touch with their body. Dancing, gym, swimming, whatever it is, it has to keep your relationship with the body alive; to be in touch with it and know it. I think we forget sometimes that our body is present when we act. Well, I know I do. Sometimes we just have to get out of our heads.

4. What’s your go-to workout at the moment?

My go to work out at the moment is actually playing AFL 9’s. Running around the field and kicking the footy ruins me. But it’s always fun at the same time.

So for those of you who haven’t tried it, check out a yoga class this month and see if you get the same benefit’s as Alec!

Alison McGirr QUT (BA Acting) is a lover of life, Activewear, and orange lipstick. Awarded the prestigious Jennifer Blocksidge Honour and Grant, she staged her first theatre production, The Interview, shortly after. Alison is part of The Heath Ledger Young Artist’s Oral History project being conducted by the National Film and Sound Archive. Having appeared in Home and Away as Molly Brenner, a move to Ireland saw her work on hit TV shows Penny Dreadful and Vikings. Once back in Sydney she trained with the Australian Institute of Fitness uniting her passion for fitness and acting.