An Interview With Director Bruce Webb 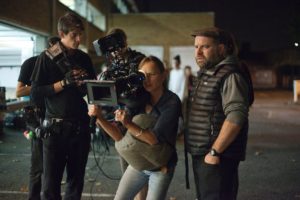 Bruce Webb is an award-winning director and producer for the screen. He has recently completed directing his second feature film, Social Suicide, a teen thriller starring Jackson Bews, India Eisley, and Olivia Hussey. His previous feature film The Be All And End All, starring Josh Bolt and Neve McIntosh, won a host of awards at international film festivals. Bruce has also produced or co-produced on numerous award-winning short and feature films, including Frank Oz’s Death at a Funeral. For TV, Bruce was a regular director on Hollyoaks, as well as directing episodes of the CBBC show Dani’s Castle and the BBC1 comedy Little Howard’s Big Question. Bruce is currently directing Red Rock in Ireland, and has numerous feature films in development.

We spoke with Bruce to find out how he came to be a director, what the right way to cast is, and how actors should get in touch with directors and producers (amongst other tricky questions).

Casting Networks: Can you tell us a little bit about how you to came to be a director? You started your career as a producer right? Have you always wanted to direct?

Bruce Webb: Nope, I never really wanted to direct in my 20s, as I found it too difficult. I started in the film business as a floor runner in 1992 and had always been into taking photos and story telling and wanted to be a journalist (as well as a yacht designer, Royal Marine, and social worker), but the job was a small horror film and I got the bug.

After that, I tried to direct a short film while I was at university, but it was a failure, largely because the DOP went off with the rushes, which are still missing today, and I didn’t have a clue what I was doing. It was a great lesson in producing rather than directing. When I graduated, I won a Royal Television Society Experimental Film Award for a film which wasn’t meant to be experimental, so I decided to call it a day on directing and stick to what I knew.

I met Shane Meadows, as I was based in Nottingham for about 7 years. He had just done his first short Where’s The Money Ronnie and I thought it was a good idea to get him to direct a film with me as a producer. At the same time, I accidentally met a writer/director who was also wealthy and I went off and produced this big £250k feature of his in Morocco while convincing him to give £9k to Shane to make his first film, Smalltime. The film I produced was a massive failure and Shane’s film a hit. Shane later asked me to Line Produce his second film, which I turned down (on reflection quite a silly move), but it made me realise that you need a decent script to make a decent film.

So I became a producer searching for great scripts and made over 40 short films, which back then were all shot on 35mm or 16mm film. Eventually feature films got produced, but it was at that point I felt I had lost touch with creativity, so gave a go at directing a short film, which was Rare Books, which was from an excellent short story by Toby Litt.

CNI: Your first short with the UK Film Council, Rare Books and Manuscripts, did very well at festivals and also featured some big talent. How did that film come about?

BW: That was a classic Cannes moment. I had been searching for the perfect story to direct as my first (finished) short and Wendy Bevan Mogg approached me looking for a director for Rare Books and I suggested myself. Both Wendy and Elisabeth Pinto, her co-producer, were in Cannes and met a guy called Mike who is now a good friend and my exec on my first feature. From that connection, within about 2 weeks we had £20k to make a short. How the finance worked I don’t know, but I shot it with a crew largely made up of friends and it was a popular film, and the UK Film Council helped us finish the 35mm prints. It got me an agent, which then it got me TV directing.

I still produce though, and edit, write, and shoot to keep a bit of variety in my life.

CNI: More recently, you’ve been working on Red Rock up in Ireland, and you’ve also done a stint of directing Channel 4’s Hollyoaks. How do you find the casting differs when you’re directing features and short films?

BW: Well, each process is different. Rare Books was done by us as a producing/directing team. My first feature, Be All and End All, was done partly by me and a casting team, which took up to two years. We saw over 300 kids to find the leads. Some films I work on are done by a casting director/agent, but if its a personal project I like to approach people personally. The problem is agents just want a financial offer rather than to attach someone, so this can take a long time.

Because TV is more like a factory, we have casting teams who put people in front of us and often we have no say on who is being cast in minor roles. Generally though, personal relationships with actors often means you might suggest them to other directors or producers or you will cast them yourself if the right role comes along. I cannot cast someone just because they are a mate. They have to fit the role or you have a disaster on your hands.

CNI: Can you tell us a little about Social Suicide? What was the idea behind it and how did you become attached as director? We also noticed that Neve McIntosh is also in this film. Was that an obvious casting choice for you?

BW: Social Suicide was a feature where I was approached as a director by the writer/producer/exec producer to come onboard. I was attracted to it, as it has pathos towards young people stuck in Social Media hell, and it was a comment on modern society. Neve is extremely versatile and the role fitted her exactly. I love working with her, she is brilliant and she is a good friend, so it was a no brainer. The rest of the cast were found by the very excellent Emily Tilelli, who I’d met on Nina Forever, which was a film I line produced and which got us a BIFA for the up and coming star Abi Hardingham.

CNI: What is your number one piece of advice to actors on approaching directors and producers?

BW: As an actor, you are a face, a look, a feel, an organic thinking, feeling, speaking thing, which storytellers use to project characters onto. Audiences see you and empathise or hate or love you and they get lost in your character’s world (if you are convincing). Audiences laugh and cry and are angry and sad with your character.

The easiest thing to do as a director is cast someone who is already that character. So a middle aged over weight man like myself would not be cast as a young handsome footballer, and vice versa. Stars though, people who have that star quality and you can tell the minute you meet them (and it’s not about being good looking) can carry different characters in the lead roles, and are a different sort of actor. I have no idea how that works, as it’s some sort of alchemy.

With all this in mind, by all means introduce yourself to a director or producer and keep in touch with them but, be realistic about who you are. The sooner you do that the sooner you will be satisfied with your career. Also, acting takes huge amount of work; networking, intelligence, skill, learning, and sometimes just the raw ability to immerse yourself in a role, and that’s the sort of person directors and producers want to meet. Not people who want to be famous or are narcissistic. Instead of selfies, we want to see someone who looks out at the world, not in at themselves.

CNI: What do you have coming up next?

BW: A feature film I have been trying to get made forever and possibly more TV (I’m waiting on a few things), but I’m currently doing the last four episodes of Red Rock season 3 and its going to be exciting from the look of the scripts. The great thing about this business is you really don’t know whats going to happen next. There has and there always will be years and months where nothing happens and you are so broke you could cry and give up, but I also have the producing background, so I can make some projects happen if they are indie films.

CNI: As a director who has done other roles, including First AD, do you think it’s important for directors to do the same, in order to be better at their job?

BW: Well, experiencing life is one massive thing you need to do as a writer or director. Certainly, learning all the roles on set by doing them is important. So too is working your way up and moving around departments. Psychology, sociology, linguistics, and having empathy is really important as well – knowing how people tick. Being interested in the world is key. How can you direct a film about a homeless 60 year old woman if you have never taken any interest in women, homelessness, and the causes of it, or people over 50? People often direct about subjects they know and love for obvious reasons. Think about that when you meet a director producer or writer; it’s an amusing and interesting insight into how they tick and what they like personally.

CNI: And any other final words of wisdom for our audience?

BW:
We have the ability as storytellers, (and actors the most, as they are the very public front of the film and TV world) to change the world for good over our lifetime and in our work. But it never happens overnight, even though the press and media tell us it does.

Bruce Webb is an award-winning film and television (BBC, CBBC, Channel 4) director and producer with an extensive list of television and film credits to his name. To see more about his work, go to IMDb or see his Vimeo page.