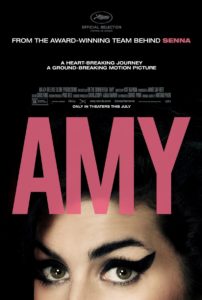 We all know how Amy’s story ends but what of the major life events that led up to that tragic day on July  23rd, 2011?  The documentary film, Amy, takes you through the tumultuous life of Amy Winehouse where the audience is a welcome voyeur.

Director Asif Kapadia takes you on a journey through her short life in non-traditional documentary style, in the same vein as his last film Senna (2010). The film does not rely on the tradition of the talking head interviews to act as the narrative from those who knew her but instead relies on private and archive footage taken from TV and Radio appearances, mobile voicemails, photographs, and home movies to drive her story. Audio from family and friends is used throughout to form a picture of Amy for her fans; their narrative is brutally honest and it helps those watching form their own personal relationship with her by laying her personal life to bare on screen.

You’ll find yourself unable to keep your eyes off Amy as her talent and personality demands the attention of the audience but then forced to look away at the harsh ridicule she endured about her substance abuse by the media and paparazzi. However, the harsh narrative is softened by the lyrics of her songs, as archive footage is matched with the gradual maturity of her lyrics and warm personal stories of the ‘absent’ leading lady, which is the mark of expert editing work and story telling.

There are some gaps in the film between her rise to fame and her relationship with her father, and it would have been nice to have more of an explanation as to his involvement and the early stages of her career.  The film does well to focus on Amy and not point the finger at anyone for her demise, but that’s not to say that you won’t see villains on screen either.

The film is about Amy’s big heart and natural candour that contributed to the beauty of her public persona…for better or for worse. In her short and bright life she fought many battles with addiction, but her talent and love never really died. Kapadia’s documentary is testament to that.

Where can you see this film?

Amy (2015) Independent theatres across the country.

Reena earned her Bachelors in Communications from Western Sydney University and currently works in the casting industry. Her heart is currently in film and writing.