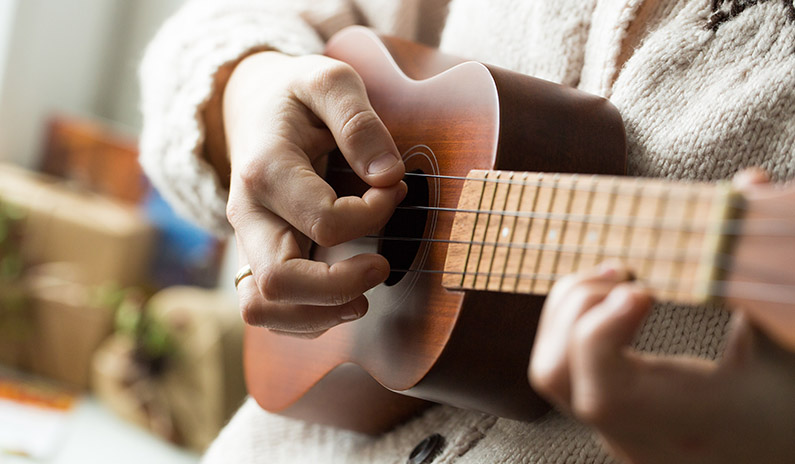 The zen teachings advise us to cultivate “beginner’s mind”, because it is the open, flexible, teachable state that is humility’s gift to growth. It’s also a dandy way to keep you in the moment, which is something every performer wants to do.

Recently, I began taking ukulele lessons, and became a newcomer all over again. It’s been challenging, exhilarating, and frustrating by turn, but I am learning a lot, and (I suspect) about a lot more than just how to play the ukulele. Here are some of my fresh-from-the-beginning takeaways that you may be able to apply to your work as an actor—or to any new hobby or endeavor you might feel like picking up.

1. Practice, practice, practice. The ukulele is a far less demanding instrument than the guitar, which I’ve tried and failed at learning beyond hacker-beginner level many times. A uke only has four strings! And a tiny neck! And—hallelujah!—open tuning! But just because it’s easier than something else doesn’t mean it’s easy, period. There are still chords to learn, finger positions to get familiar with, and, for those of us who gave up on guitar, callouses to build up. I’ve never met a teacher who doesn’t suggest that practice as the #1 thing that will turn you into a better player. And this one doesn’t ask too much of us: just 20 minutes per day! The trick is to do it every day. Because if you miss one day, it’s easy to miss two, and once you’ve missed two, you’re halfway out the door. But don’t just practice; instead…

2. Practice what you suck at. Look, I get that you don’t like to look bad. Or feel bad about your abilities, even alone, in the privacy of your own home. But as our teacher reminded us, no one ever got truly good at something by practicing what they’re good at. Do that and you will end up like me: able to play “Chopsticks” very, very well—and that’s it. Seriously: two years of piano lessons as a kid, plus two more as an adult, and that is my complete repertoire. What I’m trying to do now is devote 2/3 of practice time to what I’m bad at or find boring: fingering on the fretboard and strumming patterns, both of which feel like math problems to me. For the last 1/3, I reward myself by playing a simple song I can sing along to.

3. Add to your toolkit what YOU are most interested in. There may be some skills you need to learn that are just not fun in any way, but that are required of you as an actor. But if you’re going to stick with acting and get good enough at it to work consistently, you’re going to have to spend some of your time cultivating new skills. Try to find ones that actually interest you at least some of the time. For ukulele class, the teacher had us (a) talk about what we wanted to get out of the class, and (b) email him lists of songs we wanted to learn. Because if we can identify what it is that got us excited about the prospect of learning this instrument, and throw in a few songs that we really want to play, we stand a far better chance of staying motivated enough to learn. (For the record, the one song I asked for was “Tonight You Belong to Me,” an old duet Steve Martin & Bernadette Peters did in one of my all-time favorite movies, The Jerk. (Look for a video link in a future column—you heard it here first!)

What actor endeavors could you improve by applying “beginner’s mind”? Is there anything that you know would make you a stronger actor, but that you’re avoiding practicing on the regular? Which skills could you add to your own actor’s toolkit that might be fun to learn as well as useful to have?

BOOK(s) OF THE MONTH: By the time you read this, the 2016 U.S. presidential election will be imminent or over. (And boy, I cannot WAIT to get this one behind us!) Whatever the outcome, I am going to make the rare recommendation for a semi-political (because of context), definitely culturally-anthropological (if that’s even a word) memoir: Hillbilly Elegy, by J.D. Vance. Subtitled “A Memoir of a Family and Culture in Crisis”, it tells the story of a boy from Kentucky-Appalachian stock who made it up and out of “the holler”, ultimately becoming a real J.D., i.e. juris doctor, as an adult. It is a compulsively readable story that gives good insight into a slice of America not all of us are familiar with. And for actors, there are some truly brilliant characters to study, including the matriarch of the author’s family, J.D.’s grandmother, known as “Mamaw.”