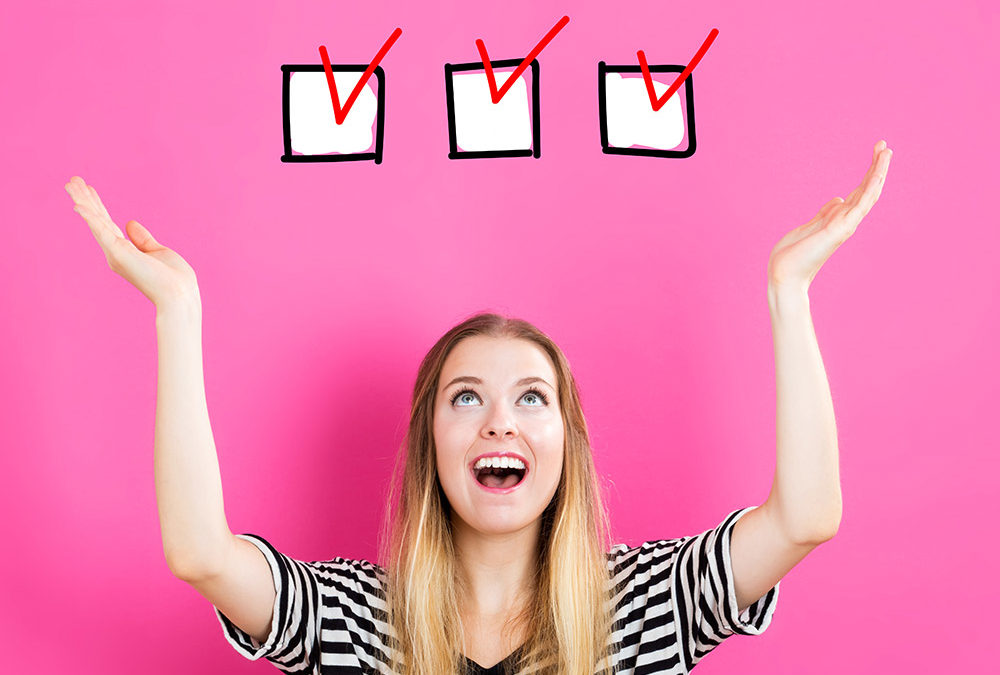 Uncharacteristically, I did not plot out my goals this year, publicly or privately, as I have in years past. But while I don’t have a normal mid-year “recap” to share, I still believe in being honest with oneself, preferably out loud, every six months or so, to ensure that too much time doesn’t slip away unnoticed. Think of a mid-year check-in as a way of seeing what adjustments you might need to make in the areas you feel need your attention. The first step toward changing anything is focusing your attention to that which needs to be changed: either to do less or more of something.

So if you haven’t already made a list of goals to check your progress against (examples here and here), you could either break things out into broad life categories (health, work, money, family, and so forth), or bust out one (or more) of those old to-do lists you haven’t looked at in a while. Me? I’m going to do a little of both! I’m also going to break down how I actually got where I am which, I find is as useful in finding where things went right as well as where they went wrong. (Pro tip: briefly outlining the “why” is also a great way to turbo-charge a gratitude list, if you’re into that kind of thing.)

This is where I’ve had the second-biggest life shift, outside of my perfect-for-me new job falling in my lap: I finally got my apartment painted! To some, this may not be a big deal. For others (especially those who, like me, have lived in the same place for 17 years) this is a BIG deal. It wasn’t exactly fun, but it feels amazing on the other side.

How it happened: I became ready to ask for help, and did, even though it was hard to accept it. I have already told my amazing friend Thor that his place is next on the to-paint list.

Score: 7/10. I’ve still made no movement on the new carpeting and A/C fronts, and I have decluttering and decorating to take care of, but it has created excellent momentum.

Did I mention my perfect-for-me day job? Other than last month and every other chance I get, I mean? Well, I’m kicking ass and taking names. And not to brag during these difficult times, but I also have the best health insurance since I lost my SAG Tier 1 (before the merger!). I’ve finally cycled out of all other freelance work, too, which has been challenging but great. Don’t worry, I’m not giving up this column anytime soon. Or maybe you should worry!

How it happened: (A), I got sick enough of hustling that I was willing to entertain the idea of the 9-to-5 shuffle. (B), I started letting people know I was willing to work, at whatever kind of meaningful work they might have. In other words, I became willing to ask for help, then did so.

Score: 9/10. Because I still have some loose ends to tie up from my previous, freelance life.

I’ll admit I’ve never been and am still not the best at relaxing, and I have been sticking very close to home as I adjust to these new hours, which get me up far, FAR earlier than I had for the past 18 years or so. Mostly, we’re talking Netflix and dinner in and the occasional movie or dinner out. This area could still use some improvement, and I could still use more naps. Lots and lots of naps.

How it happened: Again, I enlisted help. (Hey, look—a trend!) I make plans with friends, albeit very simple ones. My new rule is one social thing per week. Eventually, I’d love to get that to two scheduled and maybe one impromptu, but for now, I’m averaging about two events per week, which suits my new schedule just fine.

Between my thing-a-day projects and my occasional role as Margo on Justin Tanner’s fantastic, long-running webseries, AVE 43, I’m full up right now.

How it happened: Good exercises become good habits. I’m a thing-a-day convert. With the webseries, I got lucky. However, a lot of it is about staying in touch, hitting the play circuit, and other forms of cultivating your relationships. Remember, all things being equal, people would rather do business with people they know, like and trust.

Score: 9/10. Mostly because Ukulele has fallen off and I still haven’t started Piano lessons.

Okay! Here’s the area that is an (almost) unmitigated disaster. I’ve become that sedentary office worker I used to shake my head at, and at a workplace that is very, very generous with treats. I am now officially plump around the middle. And stiff! On the advice of my spiritual advisors, I’ve started taking lunch breaks a few times per week, which I use to do some kind of 2-mile walking errand which, includes a big hill on the way back. This is good, but moderation, as well as serious exercise, would be better. Can’t wait to hear what my doctors say about this. (Fortunately, I’ll be able to see them all this year!)

How it happened: Did you not see that part about sitting and treats? Well, and I’m lazy, too. There’s that.

Score: 5/10. I’m only giving myself marks that high because I’ve been doing a great job of spiritual and mental upkeep.

Clearly, health is the area that needs my attention right now. Fortunately, we’re heading into the best time of year to do something about it. Sunshine, long days, and fine weather. Time to make a few outdoors social plans!