The world is evolving. Machines are supplementing humanity, “ILY” is now an acronym for “I love you,” and life’s superficies defy authenticity. However, despite reality TV shows and matchmaking sites there will always be an indisputable characteristic no amount of branding can define.

Imagination is timeless. From enchanting fairytales to the midst of a Mancini overture, the fragility of life is poignantly reflected in storytelling. The artist who continues to take creative risks fuels our vision and is crucial in shaping the landscape of society.

Curly Fernandez is a Sydney based actor and performance artist who thrives on risqué performances. His work crosses traditional theatre and experimental works that constantly challenge the status quo. Curly performs and works as teaching artist for Australian Theatre for Young People, Sydney Opera House, Bell Shakespeare and Poetry in Action. He is also the Artistic Director of The Leftovers Collective a social experimental performance company that creates theatrical artworks with multiple endings for television including the ABC, Southern Star, Screentime, Grundy’s, and Channel 7.

Curly’s latest show Bluebeard is an innovative, site specific work that deals with the liberties one takes in a relationship. It deals with the age of consent, ageism and “gaslighting”

Bluebeard or, the Marriage Mistakes of a Nameless Bride is an exciting, wild, edge of your seat voyeuristic theatre experience. Based on murder and fairytales. The musician describes it as an exploration of “…emotional needs, desire, intimacy, fear, trust, aspiration, reputation, gender expectations; all sorts of things we all experience that are in there alongside the far out, suspense, horror and eroticism of a good serial killer tale. Or is it?”

There is no script. Fernandez is re-making the story of Bluebeard from scratch transforming it into a contemporary piece. It may have some abstraction which might further allow the audience to relate in their own ways. However, Curly has resisted the simple moral conclusions of a fairytale; that a young woman should be less curious or that Bluebeard is pure evil.

Created by 5 artists from diverse backgrounds, Bluebeard is more than a fairytale it depicts the brutality of existence as it happens today. It’s a story of courtship and life-altering choices that questions the source of horrific acts and what drives people to their extremities. For tickets to this all singing, all dancing and all acting extravaganza at the Bondi Pavilion, Sydney click here. 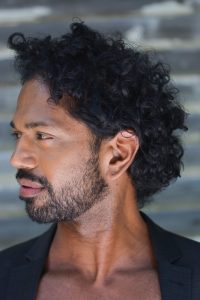 Curly Fernandez: It’s such a rewarding and death defying role. You become accustomed to switching your brain. As co producer of Bluebeard, I spent a lot of time with director Michael Dean working out what the concept was. I just had the idea that I wanted to explore a horror and an erotic tale. I have no idea why. My practice deals with a line between reality and fantasy. I really like riding that line as it’s what I’m interested in. As well as the human body. In fact, you could say I’m a body artist as my work always involves the human body. I think growing up being black in a predominately white school my body was always questioned. I am still exploring it really. As a producer – it’s all logistics and timelines. Making sure everything is actually completed pre deadline. That’s the real secret. Get it done before so you can be fully prepared. Have some time for it to breathe and fine tune. It’s been really rewarding being co producer and lead.

A: Why a Men’s Shower block?

CF: Michael and my self spent close to 4 – 6 months looking for spaces. I always envisioned it in the round with a bathtub and a life size doll. We never really found anywhere where the venue and us had a great agreement. Either the fees were to high, or we had to compete with a band. It was really tough. Michael suggested the Pavilion – I agreed, and suggested the shower. I have performed in a shower before with my company The Leftovers, on a small scale. However, this show is more narrative and site specific so we thought it would excite the venue. And it did. We are also taking inspiration from Oscar Pistorius who murdered his wife in the bathroom.

A: You have photos on Instagram having a shower in a suit. What’s that about?

CF: Again we were going for incongruity. The idea of cleaning yourself after something bad – to wash away the evidence to be protected. The suit covers the male form completely. The only skin visible is the hands and head. The suit was the ’armour’ and in it I am washing away blue blood. The shots are beautiful and are taken by a homegrown Eastern Suburbs artist Sasha Cohen. We also took some shots of local Bondi icons where the portrait is of the landscape and Bluebeard. Bondi is just beautiful.

A: Who wrote Bluebeard?

CF: Bluebeard was written by Charles Perrault. He was French and wrote the first ‘fairy tale’. They were incredibly dark and served as society warnings. He wrote Red Riding Hood, Sleeping Beauty, and Cinderella.

A: How do you balance Life and Art?

CF: I try to breathe a lot. I have a very beautiful supportive family. A gorgeous wife and charming children. They’re very accommodating with my work. I generally have 4-5 projects on the go. I’m used to juggling. I am a Clown after all. I work in kids hospitals as a clown to change the atmosphere. it’s a European style clown – no makeup just nose. Actually Bluebeard has some clown in it – maybe a more dark clown. Humour is a way to balance. That and Turkish ice cream. Seriously.

In March 2015 she launched her own company, Suspicious Woman Productions with the opening of John Patrick Shanleys “The Big Funk” in Sydney. Alixandra is also an accomplished Jazz and Cabaret Singer having performed in Sydney, Melbourne and NYC, the Australian Content Specialist, Editor and Writer for Casting Networks International and is currently applying her theatre producing skills in the packaging and financing of Feature Films.