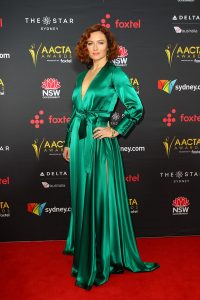 Alison McGirr attends the 7th AACTA Awards Presented by Foxtel | Ceremony at The Star on December 6, 2017 in Sydney, Australia.

Success stories are a source of inspiration. They give us hope and clarity when we need them the most. As actors our lives can change in an instant, one minute we are working long nights behind a bar, the next we are working long nights on set. To the outside world it can look like it all happened over night however, years of preparation, rejection and sacrifice have steered us in the direction of our dreams.

Alison McGirr aka our former Breathe Move React Vlogger and one of my dearest friends recently had her life change “over night’ when the famed Australian director Bruce Beresford personally called her to let he know that she would be playing one of the leads in his next film Ladies in Black alongside Rachael Taylor, Angourie Rice and Julia Ormond. Filmed in and around Sydney at the end of 2017, Alison landed the role from one self tape and the film which, will be distributed by Sony Pictures Worldwide will be released circa late 2018.

Ladies in Black is set in Sydney in the summer of 1959, against the backdrop of Australia’s cultural awakening, breakdown of class structures, and liberation of women. It tells the coming-of-age story of suburban schoolgirl Lisa, who while waiting for her final high school exam results with dreams of going to the University of Sydney, takes a summer job at a large department store. Here she works side-by-side with a group of saleswomen who open her eyes to a world beyond her sheltered existence, and foster her metamorphosis.

I recently sat down with Alison in her home in LA for a relaxed look at her most recent accomplishment.

In March 2015 she launched her own company, Suspicious Woman Productions with the opening of John Patrick Shanleys “The Big Funk” in Sydney. Alixandra is also an accomplished Jazz and Cabaret Singer having performed in Sydney, Melbourne and NYC. Currently, she is applying her theatre producing skills in the packaging and financing of feature films, in addition to continuing her work as an actor, singer and with Casting Networks. Alixandra is also the founder of LA Connect, a boutique personal service for talent and small businesses.