“At the end of the day we are all pursuing this industry because it’s fun and makes us happy.” – Alexandra Keddie

I have to admit that I have a secret girl crush on Alexandra Keddie. It all began around the time of the US 2016 election campaign. Whilst the entire free world was fixated on the Clinton|Trump theatrics I furtively imagined a world where the greatest actress to ever exist pulled a rabbit out of a hat (or in this particular case three Oscars) to become the first female President of the United States of America. A world where talent, imagination and fierce brilliance inspired humanity, a world where Meryl Streep reigned, “That’s all.”

I passionately made t-shirts and tank tops with “Meryl for President” printed on them as I envisioned the day when crowds of Streep fans around the globe would congregate to honour the finest presidential movie star who ever lived.

It was at this time Keddie, another lifelong fan of the great actress, also wrote and starred in her one-woman cabaret stage production of I See Me & Meryl Streep with a successful run in Melbourne and Sydney. With the same namesake I had finally found my fellow Meryl accomplice, Alexandra Keddie!

Meryl Streep did not win the 2016 election nor did flocks of people wear my labour of Meryl presidential fashion get-up. However, Alexandra has continued her path of dazzling Australian audiences. From three seasons on the popular Australian TV Show Offspring, to being a contestant on Australia’s Got Talent, a new short The Housemate that she’s written, produced and acted in recently released online and a successful run in The Melbourne Theatre Company’s (MTC) recent production of the Noel Coward play Hay Fever where she amused audiences with her portrayal of Jackie Coryton.

Just when you think Alexandra has done it all this trailblazer is also studying a Bachelor of Social Science at RMIT. If she keeps this up, as she no doubt will Alexandra Keddie could very well become Australia’s very own Meryl Streep.

Alixandra: First and foremost why and how did your acting career begin?

Alexandra Keddie: I started out, like a lot of kids, in dance and singing and then through my absolute love of television and movies, at 12, decided that’s what I was going to do. I looked up in the phone book where I could train and did weekly screen classes before training in Music Theatre at Harvest Rain in Brisbane. I was a total training junkie and utterly obsessed with the industry and just tried to learn everything I could. I think initially I was so drawn to the idea of attention and fame and that ‘glamorous’ life that is seemingly so exciting. I was totally in it for those clichéd reasons, acceptance and validation! I definitely thought I’d be in Hollywood by 20 and have an Oscar maybe a year or two later… it seemed inevitable, in spite of the fact that I was a pretty rubbish performer. Oh naivety!

After Hollywood decided not to call, I moved from Brisbane to Melbourne. I’m lucky that I was born into a family that are in the industry and so within a few months of moving here, my cousin Asher offered me the job on Offspring I did for 3 seasons. I was the voice inside Nina’s head and would read all the off-screen lines. It was the best crash course in being on set and seeing what the real life of an actor looks like. I had always kinda thought and hoped that I’d be the exception to the rule (don’t we all) and that I’d be that one in a million who just got work… ha! I was not. That’s when I started writing and making my own work, which to be honest, is now just as satisfying and important to me as performing is. 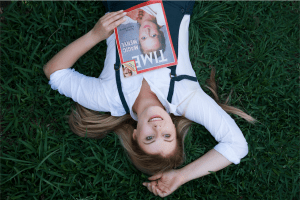 A: You wrote and starred in the one-woman cabaret stage production of I See Me and Meryl Streep with a successful run at The Butterfly Club in Melbourne, Australia. Can you tell us a bit about the inspiration behind the project, development and tips for anyone creating their own stage work?

AK: I’d been wanting to write a cabaret, I was sick of whinging and feeling sorry for myself about not working or getting seen for things so I thought it would be a good way to be productive. I’ve always been a big fan of Meryl and thought it’d be a great acting challenge as much as anything else, which it was! My main tips would be to take your time in writing the script and seek external advice. I wrote the first draft of Meryl in a weekend and thought it was pure genius. It wasn’t. I’m so glad I didn’t perform that version of the show. About 30 drafts later and 10 months of work, I ended up with something I’m really proud of and I’m so grateful to the people around me who helped me really figure out what the heart of the piece is. Secondly to that, just remind yourself that you CAN do it. All of these things are doable. They take time, money, a lot of initiative and motivation and some days you can’t be bothered trying to contact a local newspaper to ‘please write about me so people come to my show’ but it’s all doable.

A: As a writer you have two television productions in development and have just released online the short film The Housemate that is a sendup of the hit reality show The Bachelor. How is the process of developing film and tv different to the development of stage productions? 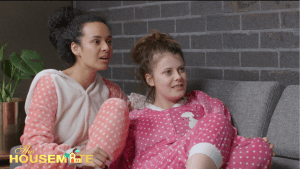 Gemma and Alex in The Housemate

AK: Filmed content requires you to be much more reliant on other people. Unless you’re a magician and can edit, direct, shoot etc. all by yourself. I cannot. On The Housemate I was a co-writer and co-producer with one of my closest friends and being able to halve the workload and have someone to bounce ideas off was such a great thing. But it was a big crew and a cast of ten so there were a lot of people to coordinate and rely on. Fortunately everyone was absolutely magnificent and totally blew us away with how much they brought to the piece but therein lays the importance of making sure you work with people you’re on the same page as, both creatively and personally. Theatre however, specifically a one-woman show, was just me. It meant it was very stressful and at times very lonely but I had total control, which is sometimes great and sometimes not so much. But in both mediums there is the fear that no one will see what you’ve made or that the work won’t be received how you’ve envisioned it. It’s always daunting to put yourself out there but it’s absolutely worth the risk. At the core of all artistic mediums is the heart of it, that underlying message that you’re trying to get across and it’s always good to remind yourself of that while you’re in the chaos of production. 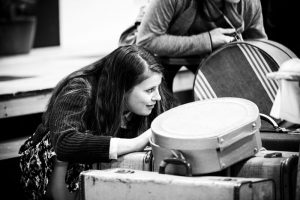 Starring in Hay Fever at the MTC

A: With roaring success you have just finished playing Jackie Coryton in the Melbourne Theatre Company (MTC) production of the Noel Coward play, Hay Fever. Tell us about the process and some of your favourite moments playing Jackie?

AK: Hay Fever has been such a thrill! I got to work with one of Australia’s best directors, Lee Lewis and a cast of sensational performers. The MTC is this incredibly well oiled machine that is also a wonderful big family who welcomed us all with open arms. We rehearsed for a month and then had a couple of days to bump in the show before we began previews and then ran for 5 weeks. It was all a total whirlwind and around every corner was a new lesson to be learned. I couldn’t be more grateful to the company and to the cast and team who’ve been so incredibly warm and giving during this process. It’s a surprisingly difficult play, but a really fun one and Jackie is such a fun character. She’s such a fish out of water, as are all the guests invited to spend the weekend with the Bliss family. The joy was finding her backbone. I think it’s important with every character to make sure that you fight for them, find their nuance and their humanity. I think it’d be pretty easy for Jackie to be pathetic but finding her strength made her far more engaging to play and hopefully to watch.

A: Mainstream Theatre, TV and Film you are doing it all! What are your tips for nailing that audition and self-tape?

AK: One of my very close friends, Emily Joy, shoots all of my self-tapes and she’s taught me so much about making sure you’re bringing as much of yourself to the screen as you can. It’s your own idiosyncrasies that are going to make you come alive and set you apart. Perhaps it won’t be right for that role that you’re auditioning for (perhaps it will) but a great audition is a great audition and if it’s not that job it’ll be the next one or the next one.

It’s often such a rarity that we get to audition. So when we get to, it’s awfully daunting and I know I place so much pressure on that one scene. To combat that I try to keep myself in regular practice by shooting scenes with friends or going to class or learning a monologue to perform to my cat. All of that means that when the tape comes along or you’re actually in the room, it’s not the be all and end all and you can actually enjoy it.

At the end of the day we are all pursuing this industry because it’s fun and makes us happy. Regardless of whether you’re doing a show or have a spot on the telly, you’re auditioning, you’re meeting with your agent, coming up with ideas about a new project, watching a great movie or whatever it might be, I’ve come to realise that all of these things are ‘the job’. It’s not just that day on set or your opening night that makes you an actor. They’re all related and they all matter.

In March 2015 she launched her own company, Suspicious Woman Productions with the opening of John Patrick Shanleys “The Big Funk” in Sydney. Alixandra is also an accomplished Jazz and Cabaret Singer having performed in Sydney, Melbourne and NYC. Currently, she is applying her theatre producing skills in the packaging and financing of feature films, in addition to continuing her work as an actor, singer and with Casting Networks International. Alixandra is also the founder of L.A Connect, a boutique personal service connecting Australian talent and Businesses.