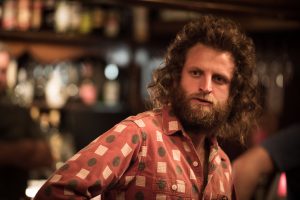 “Ill fares the race which fails to salute the arts with the reverence and delight which are their due.”
– Winston Churchill.

It was 1938 when Winston Churchill spoke these sentiments; the world was approaching a war that Britain would engage in for national survival. Yet, even on the brink of a shattering historic episode, one of the most powerful men in the world recognised the importance of the arts in defining it’s time and empowering it’s people.

Storytelling is fundamental to the preservation of civilisation; it reinforces a nation’s cultural and social interest, cultivating historical events which otherwise would dissolve with time. With each brush stroke and penned word, citizenries are enlightened to the melody of the times and the narrative of the creative visionary is ignited.

Born in rural Victoria, Australia, Aaron Glenane is the type of actor that takes the term “visionary” to another stratosphere. His work is all-embracing passion, fuelled with an undeniable tenderness, melting even the most cynical of hearts. His talents aren’t just restricted to an already impressive filmography, including the role of Mushroom Records founder, Michael Gudinski, in Molly for the Seven Network; Deadline Gallipoli; Home and Away; Janet King; working alongside Cate Blanchett and Robert Redford in Truth; Happy Feet 2; Drift; and more recently Killing Ground, which premiered at the 2017 Sundance Film Festival. Additionally, Aaron is a gifted stage actor and dancer whose credits include Tap Dogs, The Boy From Oz, and Orphans.

With his intrinsic versatility and beautifully defined characterisations, Aaron Glenane is destined to continue his path of creating wholehearted roles essential to the framework of our times. 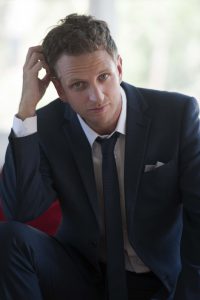 Alixandra: From rural Victoria to sharing the screen with the crème de le crème of Hollywood, what inspired you to be an actor?

Aaron Glenane: One of the greatest gifts my dad shared with my siblings and I was a cassette tape of the Good Morning Vietnam soundtrack. We would listen to it over and over, so much so that my brother and I began our own radio show interviewing the likes of “Sean Connery” about the meaning of life. Robin Williams and Jim Carrey were two people that set my imagination alight, along with movies like Indiana Jones and Back to the Future.

But the moment when I was struck by the feeling of “this feels right” was when I took my first step on stage in a local production of Oliver! at 15; it was an adrenaline rush like nothing else. I was enraptured by the feeling of working with the audience, and the fellow cast, to take them on an exciting ride. I could feel the audience come alive, and it has been this ignition of emotions and ideas that has excited me ever since.

A: From stage to TV and film, your dazzling talent crosses all mediums. Do you have a favourite and why?

AG: I think all forms bleed into and compliment each other. What I learnt from reaching the back wall of the theatre translates to hitting the back wall of a fellow actor, the lens, and the horizon on film. I like to let the character dictate where the performance will go rather than trying to fit into the format. I love the intimacy of film and being part of a great collection of people who are creating the final images and sound scapes that appear on screen. In television I love being part of a great “novel,” where you really have time to sit with the characters, watch them develop, and let the story unfold chapter by chapter. I love the immediacy of theatre and the fact that a performance will be different every single night. The excitement and challenge of bringing it alive for an audience, who is most likely seeing it for the first and only time, is hard to beat.

A: You embrace each role with great detail and heart. How do you prepare for a role?

AG: Oh, wow. For you to say that means so much to me, as that’s what I’m going for every time I get up there. I bring my heart and soul to every character and hope that it resonates with the audience. Every character/person is so different, but I like to start with living the life of the character. For example, I’m about to play a devoutly religious travelling salesman, so I’m going to church constantly and reading passages and books that I imagine him reading. Learning about areas of life I know nothing about interests me greatly, so to get to explore the characters life helps the performance come much more naturally for me when it comes time for “action.” Over time I’ve learnt and trusted to work from a more internal place, and allow it to inform the vocality and physicality of the character.

A: Can you share with us some of your most rewarding career moments to date?

AG: I‘m pinching myself constantly, but here’s a couple of moments that sit with me:

1. When I was 13, Mum entered me in an eisteddfod to do a reading from Tomorrow When the War Began to overcome my shyness. I was competitor number 7, hoping that number 6 would never end. When it was my turn, I took a deep breath, got up, and made it to the end of the piece. Afterwards I wanted to do it again! As Michael Jordan says “Fear is an illusion.”

2. Tap dancing as a penguin in a full body motion capture suit in the middle of summer in a (albeit very nice) tin shed with George Miller and Dein Perry! 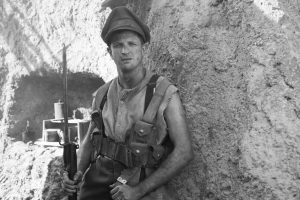 3. On my first day of Drift, I shot Gus’s final scene first. I stood on the shore at dusk, butt naked and crying, before paddling out into the ocean, take after take with huge floodlights on my pale, shivering body in front of a bunch of strangers! I could do anything after that!

4. Looking into Robert Redford a.k.a. The Sundance Kid’s eyes, saying dialogue with him while Cate Blanchett stood by his side in Truth.

5. Having a homicide detective come up to me after a screening of Killing Ground and saying Aaron Pedersen and I had captured the feeling of the Milat and Murphy Brothers cases she’d worked on in the past.

A: Last, but certainly not least, you recently played ‘Chook’ in the thriller Killing Ground that premiered at the 2017 Sundance Film Festival in January. Tell us about the film, your role, and what audiences have to look forward to.

AG: Picture a young couple driving deep into the Australian bush for a weekend getaway from city life. When the occupants of a nearby tent don’t arrive back, they decide to stay overnight, and the following morning they stumble upon bruised and battered toddler in the forest . . . and that’s where their troubles begin! I play Chook, a young man who has been taken under the guidance of German, his surrogate father. Living in a small, isolated town where his hopes and dreams were squashed from an early age, his life is a constant state of rejection and after 28 years that runs a little thin.

In a world of superhero movies where we can all save the day, this film challenges you to ask yourself “If you were in this situation, with your knowledge, skills, and courage . . . what would you really do?” Throws out all the rules. No one is safe. Damien Power has created Australia’s own Deliverance. As the brilliant Harriet Dyer says when watching this film: “WEAR. BROWN. UNDERPANTS.”

Alixandra is a graduate of the Actors College of Theatre and Television Sydney and the Terry Schreiber Studio and Theatre in NYC. She has also studied at the Eric Morris Workshop in LA and the Bova Actors Workshop in New York and The Actors Studio NYC. Alixandra interned at The Performing Garage NYC run by William Dafoe.

In 2015 she launched her own company, Suspicious Woman Productions with the opening of John Patrick Shanleys “The Big Funk” in Sydney. Alixandra is also a Jazz and Cabaret Singer having performed in Sydney, Melbourne and NYC. Currently she is the Australian Content Specialist, Writer and Editor for Casting Networks Australia and based in Beverly Hills, California where she is applying her theatre producing skills in the packaging and financing of feature films whilst she continues writing and publicity work.