5 Questions in 5 Minutes with the Pitbull of Comedy, Bobby Slayton 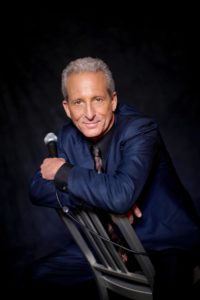 “Bobby Slayton is one of the few original politically incorrect comedians. He’ll pick on everyone from the Mafia to the Muslims. I wanted to punch him in the mouth a couple of times when he opened for me, but I was laughing too hard to make a fist. No one is safe from the bite of ‘The Pitbull.’” – Actor/Singer, Robert Davi

Humor is infectious. When laughter is shared it binds people together, and increases happiness and intimacy. It is no joke that a gargantuan chuckle has the ability to relieve stress and send signals to our brains sparking priceless endorphins, confirming that some good old guffaw-ing can be just what the Doctor ordered.

Comedians are often fallaciously identified by their on stage personas, and the gags they tell about their lives are believed by many to have an element of truth. However, the tears of a clown are shed in the dark and these extroverted entertainers are often the most complex and fascinating of performers.

Named one of Comedy Central Network’s “Top 100 Comedians of all Time,” with his unique candid flair, Bobby Slayton, aka “The Pitbull of Comedy,” aka “Yid Vicious,” has been mesmerizing audiences for over 30 years.

The talent of The Pitbull does not end at comedy; his distinctive gravelly voice can be heard on Family Guy and Dr. Katz, as well as popular USA radio shows including Howard Stern, Kevin & Bean, and Tom Leykis.

Recently, Slayton wrapped on the new Woody Allen miniseries, Crisis in Six Scenes in NYC, due for release on Amazon 30th September 2016. When he is not performing on late shows or touring the USA as a comedian, you can find him in an array of films, such as Clueless, Wayne’s World 2, Dreamgirls, Ed Wood, and Get Shorty. In 1998 Slayton portrayed Joey Bishop in HBO’s The Rat Pack, which is undoubtedly his most distinguished acting role to date.

With his personal style of insults and storytelling, similar to that of Don Rickles, Slayton was born to make people laugh, so it comes as no surprise that the irreverent Yid Vicious shared a close friendship with the late comic genius Robin Williams. Together they launched their comedic careers in San Francisco in the ’70s and thus began a comradeship, which endured until Robin’s untimely death in 2014.

He was labelled as “Armed and Dangerous” by the NY Daily News and, according to the Las Vegas Review Journal, “Slayton’s refusal to compromise his art has always made him worth a special trip.”

As far as Bobby is concerned, “If you can’t laugh at yourself, make fun of other people!”

With his unapologetic humor there is truly no mistaking the captivating bite of the comedian, actor, and voice-over artist, who is indeed the Pitbull of Comedy.

Alixandra: Your career began in the ’70s in San Francisco; what a time and place to be alive! What is one of your fondest memories of this period?

Bobby Slayton: I wish I had more fond memories of starting out in the ’70s during the big comedy resurgence! I think I was pretty much exploding in the late ’70s and early ’80s when comedy clubs were opening all over the country, comics were showing up on more TV shows than ever, and opening for rock bands and Vegas headliners. It wasn’t a particularly memorable time for me because, to be honest with you, I wasn’t very good, I was very young, had no idea what I was doing, because it takes a long time to figure this shit out. It wasn’t like it was professional sports or law school. There was no playbook, no guidelines, and no rules. If you wanted to be a comic you had to figure it out as you went along. It was quite a bumpy road at times. And some of the accommodations on the road were less than stellar. It could get pretty lonely and depressing out there sometimes.

AK: Your friendship with the exceptional Robin Williams was certainly a special one. I have heard stories of him surprising you on stage on your birthday, among others. What is your most beloved story of your friendship with Robin?

BS: Robin and I go way back, before he even became famous with Mork & Mindy. I do have a  lot of fond memories that make me laugh when I think about them, but most of them I don’t think I’m ready to share. I miss him a lot.

AK: As someone who has been in the business for decades, from being constantly on the road to working on hit movies, what keeps you inspired?

BS: As for what keeps me inspired to keep doing this, that’s a tough one because I’ve been doing it for so long, and audiences, especially younger ones, have a very short attention span these days. I really do think because of the Internet, social media, smartphones, and everything going viral so quickly, many people don’t have the patience to read a newspaper, sit through a movie with subtitles, or watch a show that doesn’t have a punchline, or a movie that doesn’t have an explosion every 30 seconds. Of course that’s not everyone, but it’s palpable in clubs and theaters more often than it used to be. What inspires me the most is that if I don’t force myself to write new jokes, my show is boring for me and this whole thing becomes a fucking job. I can’t speak for other comics but when I started pursuing this I realized if it works out I don’t have to have a real job ever again.

AK: Recently you wrapped on Woody Allen’s new mini series. What was it like working with Woody?

BS: Working with Woody Allen was probably the highlight of my career. It was only a few scenes, but I got to act with him as well as get directed by him. Like my friend Kevin Pollak – who’s got a tremendous body of acting work under his belt – said to me, working with Woody is every comic and actors dream. He’s one of the heads on Mt. Rushmore as far as modern day directors go.

AK: Last but not least, why comedy? And what advice do you have for those starting out in the business?

BS: As far as advice for young kids starting out – I never give advice. I got advice from so many people when I started out, and never listened to the good advice and always took the bad advice. That could be why today I’m not as rich and famous as I was planning on.

In March 2015 she launched her own company, Suspicious Woman Productions (SWP) with the opening of John Patrick Shanley’s The Big Funk in Sydney. Alixandra is also an accomplished Jazz and Cabaret Singer performing in Sydney, Melbourne and NYC. In August 2016 SWP are excited to be teaming up with Lies, Lies and Propaganda in Sydney with Orpheus, the Australian gothic spin on the classic tale of Orpheus and Eurydice. For tickets visit www.liesliesandpropaganda.com.