5 Questions in 5 Minutes with Ray Abruzzo from The Sopranos 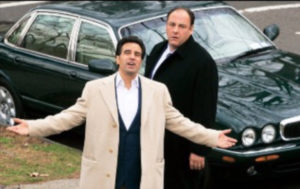 New York City will rob you, cheat on you, and turn your friends against you. It will kick your ass and downright break your heart, then, in a New York minute, it will pick you back up again, make you feel so extraordinary you couldn’t possibly be alive anywhere else. You will feel like you are in the centre of the world.

Why? Because that is exactly where you are.

As an actor and singer I have always been drawn to the Big Apple. LA, whilst sunny and glamorous often finds me struggling to navigate a stick shift through endless traffic jams (not just on freeways). However, the authenticity permeating the city of New York is a testament to all its inhabitants. Its energy fuels creativity and exudes passion whilst being a constant reminder that no matter who you are, reality is only a subway ride away.

I remember Harvey Keitel strutting the NYC uniform (black t-shirt and jeans) straight out of the subway with his $2 street cart coffee and into The Actors Studio insisting that regardless of where our career takes us to always return to the groundwork of the East Coast.

I was reminded of this time and time again in NYC, like the time I saw Bobby Cannavale learning lines on the subway, Frances McDormand casually walking through the streets of Soho, brushed shoulders with Al Pacino on my way to an audition, walked into Nathan Lane as he hurried into the theatre with such trepidation for his first preview of “The Nance”, a casual dinner with Mel Brookes at an underground 1920s swing club or when I had an overly friendly man (who shall remain nameless) kicked out of my local bar without realising he was one of the biggest actors at the time. “Getting famous people kicked out of bars now, are we Alix?” the barman facetiously asked.

Just like the city they live in, NYC actors are unique. It’s a jungle and they are constantly on patrol. Hunting for that one breakthrough role that will cement their careers and open doors, which often lead them to the sunshine and beaches of the West Coast.

Ray Abruzzo is exactly that. A NYC actor, well known for his role as “Little Carmine” in the award winning HBO series The Sopranos.  Originally a New Yorker from Queens he is now based on the West Coast whilst still checking into the East Coast whenever it calls.

You certainly have some very impressive credentials; Bones, Boston Legal, Dynasty, Law and Order, Mad Men, Ray Donovan and of course The Sopranos to name a few. When did you decide you wanted to be an actor, and how did a guy from Queens make this happen?

When I first started high school at 14 there was a day when you had to sign up for an extra-curricular activity.  I had no idea what I would do. I was walking down the hallway with my friends when I saw a sign “Auditions Today”. I stuck my head in the auditorium and saw the prettiest girls in the school.  I told my friends, “you guys go ahead, I’m going in here!”

I auditioned for a part in Inherit The Wind and I got it. That was it. I was hooked. I then did every play I could. I was part of a summer theater group formed and run by us kids. No adults, just teenagers dedicated to putting on plays. We did it all. I developed work habits that carry me through to this day. It was a slow start for me to start making a living. It starts small, a few lines here, a few lines there. You do your job and maybe, just maybe it leads to another. It is really a miracle to make it and last in this biz.  I feel very fortunate. Luck, sticking with it and luck. Did I say “luck” twice?

Ha! You did indeed. Do you think NYC is a different place for an actor now compared to when you were starting out?

The whole business is different. That said NY seems to maintain an emphasis on learning your craft and the importance of theater in that process. When I started out in the 70’s in NY, working on TV couldn’t be further from my mind. It was all about “process.” I know it has changed but perhaps not as drastically as LA. I just spent a few months doing a play in NY and was revitalized with the energy of the theater world.

For two years you played Carmine “Little Carmine” Lupertazzi Jr., the son of the leader of one of New York’s five families on the award winning TV show, The Sopranos. You must have formed some unforgettable bonds. Was it as though the cast and crew were your very own family every day on set?

Actors live an unusual life. You go from job to job working with new people and are instantly thrown together for long days. You work, eat, drive in a van at 5:30am together, or perform in a play with months of intimacy. Then it ends. It always feels like family. Sometimes you never see the people again. Sometimes they become part of the rest of your life. This is the life of an actor.

When I got the part on The Sopranos, it was already a huge, ground-breaking show. I was hired from a “self-tape” from LA.  That was not the norm for that show. I had been living in LA for many years. The actors on the show all had a history that went back even prior to The Sopranos. That said, it was an amazing atmosphere. People didn’t run back to their trailers between shots. Everyone sat around like a bunch of guys on a stoop just “shootin’ the shit”. I did make some good friends. Carl Capotorto “Little Paulie”, for instance, became a close friend.  He is now a writer on Terry Winter’s (The Sopranos, Boardwalk Empire, etc) new show VINYL on HBO. When James Gandolfini passed away, I went back to NY for the funeral. Everyone was there. It was then that the bonds we forged on that show became evident. We had all had a shared experience of being on that show and all that came with it. A unique experience that only we could understand. Now we were sharing in the loss of the man that made it all possible. The center of our universe for that period of time was now gone. Yes, it was family.

That was such a sad day in NYC. He was an incredible man with an incredible talent. You have worked with many wonderful actors like James. What have you learnt from them?

I have been so fortunate to work with some amazing actors, both famous and not so famous.  James Earl Jones, Sir Ben Kingsley, Dick Van Dyke…I learn something on every job.  James was no exception. He was a great character actor, a working-class actor that just happened to be playing an iconic part in a ground-breaking hit show. His approach remained grounded in “the work”- never being “the star”, always “an actor”.

He treated everyone on the set as equals. Everyone was there to do his or her job to make the best show possible. He was truthful in his work. Focused and fun.

You are now based on the West Coast. What would you advise any actor wanting to set up base in LA?

LA is a strange town. I realized early on the emphasis was less on the work and the acting and more on getting a TV job. I would give the same advice to LA actors as any actor anywhere.  Be ready! Be healthy and prepared. However, besides that, I would say find things in your life that give you joy OUTSIDE of the biz. That doesn’t mean you are not giving 100% to your art but it makes you a better, more well-rounded person and therefore a better actor. If your happiness is solely dependent on getting a job on CSI or something, you are setting yourself up for a lot of disappointment. Find joy in something you can do on your own.  And ACT every chance you get.

Wonderful advice! Thanks so much Ray.

In March 2015 she launched her own company, Suspicious Woman Productions with the opening of John Patrick Shanleys “The Big Funk” in Sydney. Alixandra is also an accomplished Jazz and Cabaret Singer having performed in Sydney, Melbourne and NYC.