Coming out, what does that mean? What I’m concerned about is people as human beings.” 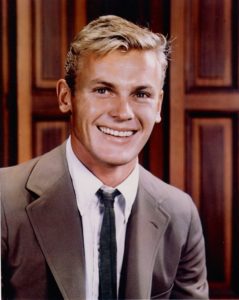 Silver screen sirens and all-American boys – a grandiose mix of heartthrobs manufactured by major film studios that compelled millions of fans worldwide. From Metro-Goldwyn Mayer to 20th Century Fox, this was the recipe that dominated the American and global cinema industry during the Golden Age of Hollywood.

Tab Hunter was one such all-American sweetheart. Born Arthur Kelm on 11 July 1931 in New York City to a German Catholic immigrant mother and a Jewish father, Hunter later moved to California with his mother, brother, and grandparents after his parents’ divorce. The divorce also initiated a name change, from “Kelm” to his mother’s maiden name “Gelien.” In California, he served a stint with the Coast Guard (until it was discovered he was only 15), and was a competitive figure skater. Hunter who has always been an avid horse enthusiast even worked a job at a stable. However, it was only a matter of time before the statuesque man with movie star good looks seized the eyes of the Hollywood moguls. 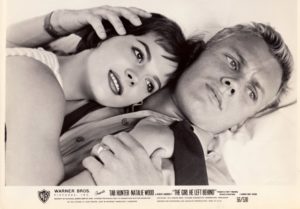 Natalie Wood and Tab Hunter. ‘The Girl He Left Behind.’ 1956. Warner Bros.

Henry Wilson was one of the infamous agents of the golden era and largely responsible for creating the Tinseltown beefcake craze during the 1950s. With a plethora of young, handsome clients including Rock Hudson, Troy Donahue, and Robert Wagner, Wilson was known for discovering and grooming new talent to suit the star power of the film studios at the time. Upon meeting the athletic and handsome Arthur Gelien, Henry quickly transformed him into Hollywood’s future Golden Boy “Tab Hunter,” and signed him as his next protégé, catapulting him into motion picture stardom, despite the boy’s lack of movie experience.

Shortly following, a contract with Warner Bros. made Hunter a household name, introducing him to the hearts of teenage girls worldwide. If you have never heard of Tab Hunter before now, simply ask your mother or grandmother and watch as their faces light up. He was the “All-American Dream Boy” – tall, tanned, down to earth, and charming, with a body to die for. With a string of film credits starring opposite Hollywood’s finest leading ladies, including Natalie Wood and Sophia Loren, as well as a brief chart-topping recording career, by the time the 1960s came around, the dust from the teenage revolution had settled, along with Tab Hunter’s desire to keep up with the tyranny of studio life. 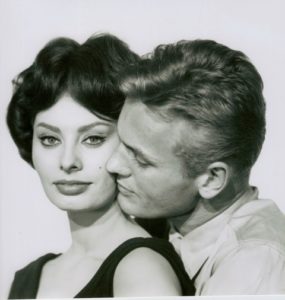 Against the wishes of Warner Bros. tycoon Jack Warner, Hunter was released from his limiting contract, however, this would come at a price. In exchange for freedom, he was ordered to pay Warner Bros. a large compensation in return.

The newly liberated heartthrob was free to work as he pleased. But despite starring opposite Debbie Reynolds in the 1961 hit The Pleasure of His Company, Hunter’s film offers rapidly dwindled, and after a string of elementary success including his own series The Tab Hunter Show, which lasted one season, and an Emmy award nomination for his outstanding performance opposite Geraldine Page in a Playhouse 90 episode, Hunter’s golden years ceased and the public was left wondering: whatever happened to Tab Hunter? 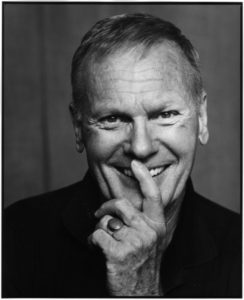 “You can always be true to yourself . . . even if you only admit the truth to yourself.”

Still alluring, Hunter experienced a comeback in the 80s and 90s in a number of film and television programs, including Charlie’s Angels, Polyester, Grease 2, Benson, and Dark Horse. However, it was in 2005 that the very private Hunter undertook his most advantageous project to date: the release of his autobiography, Tab Hunter Confidential: The Making of a Movie Star. Co-written with Eddie Muller, the book became a New York Times bestseller and for the first time publically outed Tab Hunter as gay, thus confirming decades of rumours and the truth behind his struggles as Hollywood’s “Golden Boy.” Ten years later, the documentary Tab Hunter Confidential was released, further illustrating Hunter’s challenges as a gay man at the height of 1950s stardom. Yet, what is perhaps most heart wrenching, is Hunter’s unmistakable drive to live an authentic and wholesome life.

At the age of 85, he now spends his time with his two true loves – his horses and partner of over 30 years, producer Allan Glaser. The days of his closeted Hollywood life are over, and whilst he is no longer a teen idol, he is indeed a handsome man with an internal beauty that permeates outwardly. For Tab Hunter, life has never been about “labelling a person,” instead it is about “who we are as human beings . . . are you a decent human being? What are you contributing? That’s important.”

From a New York City child named Arthur Kelm, a California teenage athlete known as Arthur Gelien, to leading Hollywood heartthrob Tab Hunter, there is no denying the contribution of this dynamic soul. 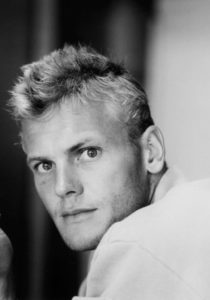 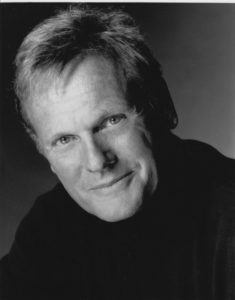 Alixandra: From figure skating to horses and movies, you are a man of many talents. What inspired you to have a Hollywood career?

Tab Hunter: I always loved going to the movies as a kid, but never thought of becoming an actor. I wanted to be an equestrian, riding and training horses, and [hoped] to have my own stable. As fate would have it, I was at a stable mucking out a horse stall when I was discovered by an agent. His name was Dick Clayton and he was the one who put the thought in my teenage head about becoming an actor.

Dick became my inspiration, good friend and mentor. Dick was the one who put me on that path. 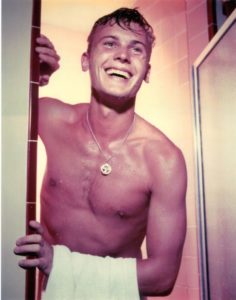 A: Hollywood has changed. If you had the success you had in the 1950s in today’s society would you still feel it necessary to hide your sexual orientation, or would you do things differently?

TH: Only certain aspects of Hollywood have changed. Believe it or not, as far as the world has come in it’s acceptance towards homosexuality, it’s still near impossible for an outwardly gay male to be cast as a romantic lead in a motion picture. You can be outwardly gay and be cast as the best friend, comic relief, or secondary character in a film, but still not a romantic lead. So yes, I would still feel it necessary to hide my sexual orientation if I were pursuing a career as a leading man, or I most likely would not be working.

A: In the documentary Tab Hunter Confidential, you beautifully portray your dedication to your mother [Gertrude]. How much influence did she have on your life and career?

TH: My mother had a tremendous influence on my life, but not my career. Because of her, I was raised very grounded and devoid of ego. Her mantra was “nothing for show” and of course I ended up in “show business.” She was very strict and was no-nonsense. I always appreciated the sacrifices she made as a divorced woman raising two sons during the depression. Her morals, which she ingrained in us, helped me navigate through that Hollywood machine and come out the other end a whole person.

A: With its highs and lows, your career has spanned decades. What did you find most enjoyable about your career?

TH: The most enjoyable aspects of my Hollywood career [were] working with the most talented actors/actress and directors in Hollywood at that time. Linda Darnell, Sophia Loren, Debbie Reynolds, Natalie Wood, John Wayne, Robert Mitchum, Lana Turner – the list goes on and on. I never loved the publicity/hoopla/fame of Hollywood, but the work itself was very gratifying. 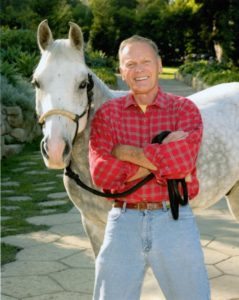 Tab is most at home with his horses and partner of 33 years, Allan Glaser.

A: Tab Hunter Confidential, aside from exposing your homosexuality, also revealed your need for authenticity. What advice do you have for anyone who finds him or herself in a position where they are unable to be true to themselves?

TH: You can always be true to yourself . . . even if you only admit the truth to yourself. Then the biggest battle is won. Your life is your business and no one else’s, until you decide to share whatever information you wish.

I was having lunch with Geraldine Page while we were co-starring in Portrait of a Murderer in 1958. She was a brilliant actress and the critics loved everything she did, unlike me. I remember saying to her, “Gerry, you can do no wrong. The critics love everything you do and they hate my guts.” She took my hand and said, “Listen Tab, if people don’t like you, that’s their bad taste.”

I never forgot that and I’d like to pass that on to everyone. If people don’t like you, that’s their problem, not yours. Just go down that road the best you can and don’t worry about what other people think.

In March 2015 she launched her own company, Suspicious Woman Productions with the opening of John Patrick Shanleys “The Big Funk” in Sydney. Alixandra is also an accomplished Jazz and Cabaret Singer having performed in Sydney, Melbourne and NYC as well as the Australian Content Specialist, writer and editor for Casting Networks Australia.