Taking the Plunge – Your First Visit to the Cannes Film Festival

The arrival of May in the film business means one thing – it’s time for Cannes.  The Cannes Film Festival is, of course, synonymous with red carpets, gala screenings, and glamourous parties.  But while celebs are posing for the paparazzi and the auteurs are presenting their latest opuses, the rest of the industry is getting on with its biggest gathering of the year.

Festival aside, Cannes is the world’s largest film market – effectively a giant trade show for the industry.  Buyers and sellers from all over the world come to meet and do deals, and the rest of the industry arrives to take advantage of the fact that pretty much the entire global film industry is in one place for 12 days.

Regardless of which area of the industry you work (or are hoping to work) in, a first time visit to the festival is one of the best introductions you can get to the way the global business works.  The fact that it takes place in a town on the French Riviera is also a bonus.

What is this thing called ‘Cannes’?

The event that the industry commonly refers to as “Cannes” is actually an amalgamation of a bunch of separate events which run concurrently in the city of the same name.  The biggest is the Festival de Cannes, which is the main event and the official “Cannes Film Festival”.  Alongside, you have the Marché du Film (the Cannes film market), and several sidebar events including the Quinzaine des Réalisateurs (Directors’ Fortnight) and the Semaine de la Critique (International Critics’ Week).

How can you attend? 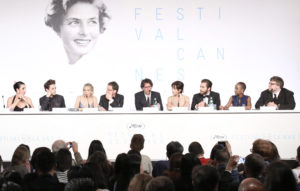 Unlike most film festivals, the vast majority of the screenings and events at Cannes are reserved for industry professionals.  To attend, you need to gain accreditation which comes in three main flavours:  Festival, Market, and Short Film Corner.

Regardless of which flavour you choose, it’s not recommended to go to Cannes without accreditation.  You won’t be able to access any official venues (nor quite a few of the unofficial ones too).

Getting there and where to stay…

Cannes itself is about 20km from Nice so, for flights, your main entry point is Nice Côte d’Azur International Airport.  Nice is one of France’s busiest airports so it is serviced by a large number of scheduled and low-cost carriers.  Once you arrive, you’ll need to get a transfer from the airport to Cannes, which takes about an hour by bus.

When it comes to accommodation, finding somewhere in Cannes that’s reasonably-priced and well-located is your biggest challenge.  Most hotels jack up their prices for the festival and will require you to book for the full 12 days, even if your trip is shorter.  The best value is normally apartment sharing with friends or colleagues (which normally entails jamming a large number of people into a small flat).  Airbnb can sometimes deliver, although most hosts have minimum stay lengths for the festival.

It may be tempting to book accommodation outside of Cannes to save money, but it’s a false economy.  It can leave you feeling detached from the festival, and more importantly, having to head home early to avoid an expensive late-night taxi means you miss out on a large part of the benefit of being at Cannes – the after hours socialising.

Some parting words of wisdom…

When done properly, Cannes is an amazingly fun and worthwhile experience for anyone working in the film industry.  Some additional things to remember…

Always stay out late.  Those who go to bed early lose out.  Cannes is 24/7 and you can meet some of the most interesting (or entertaining) people in the wee hours.  You can sleep when you get home.

Talk to everyone.  The festival seems to make people more open than they are at home.  Use the opportunity to talk to everyone you meet.  And don’t just spend the whole time hanging out with your mates from home.

Business cards.  This is the main commodity traded in Cannes, so bring loads.  They don’t need to be fancy; just contain your main information.  It’s also good idea to have cards that are possible to write on.  You end up meeting so many people it quickly becomes impossible to remember who was who.  Organised people jot down a note on the card to help jog their memory later.

Keep it real.  Inevitably, you well meet some major bulls&%t artists in Cannes.  Don’t be one of them. Film industry people can smell it a mile away so it just makes you come off looking like a chump.  Resist the temptation to big up the cast you don’t really have attached to your project, avoid inflating the size of your last budget or embellish your CV, and don’t go around telling people that your film “got into Cannes” when it’s just in the Short Film Corner!  The best and only way to impress people is to be honest.

Benjamin Craig is a producer and the author of “Cannes – A Festival Virgin’s Guide”, the leading handbook for filmmakers and film industry professionals attending the Cannes Film Festival.  www.cannesguide.com.